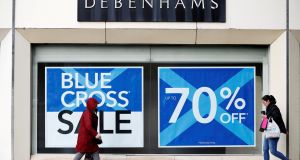 Debenhams has been given the green light to press ahead with a £200 million (€233m) refinancing, paving the way for the likely wipeout of existing shareholders, including Mike Ashley’s Sports Direct.

The struggling department store chain said on Thursday that it has received approval from the majority of its bondholders to make amendments to loan notes due in 2021. It will allow Debenhams to embark on a wider restructuring in an effort to secure the future of the business.

However, an associated restructuring plan could wipe out existing shareholders, such as Mr Ashley, who has been attempting to seize control of the firm.

Debenhams is now expected to look at a debt-for-equity swap and a pre-pack administration, with the latter expected to be more likely as it does not require shareholder approval.

Both options would result in existing investors losing their holdings in the company.

A company voluntary arrangement to speed up store closures and rent reductions could also be part of the plans, or come at a later stage.

The latest development is likely to infuriate Mr Ashley, who said on Wednesday that Sports Direct is considering tabling an offer for Debenhams which would value it at £61.4 million.

Debenhams has so far resisted overtures from the billionaire. – PA