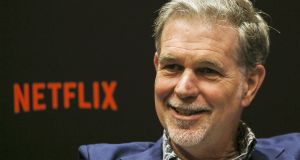 Netflix co-founder and chief executive Reed Hastings. The company spends about €1 billion a year on technology and €8.8 billion on content. Photograph: Ore Huiying/Getty Images for Netflix 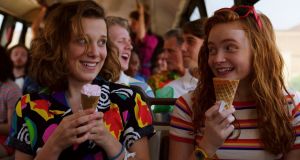 There’s no business like show business, particularly for Netflix. It might have started out as a tech company, but it’s increasingly out to convince the world that it now predominantly deals in entertainment, unlike rivals such as Amazon and Apple.

“We’re really mostly a content company powered by tech,” is how co-founder and chief executive Reed Hastings described Netflix during a Q&A with journalists last Monday.

That might seem surprising with the company’s success primarily built on having developed technology that allows subscribers to watch what they want when they want. But with Netflix now spending about $1.2 billion (€1 billion) a year on technology and $10 billion (€8.8 billion) on content, Hastings has a point.

He was speaking as the company opened its doors to bring the media behind the scenes last week in LA. With a clear view of the Hollywood sign from the rooftop and a cabinet stuffed with awards, the company was intent on showing off its credentials to one and all.

The event covered everything from sneak previews of forthcoming shows and tours of Netflix’s animation studios, to earnest discussions on the future of entertainment. But the focus was firmly on the future as the company talked up its plans to introduce more interactive content and animation, and persuade more viewers to watch more shows made in other countries.

To drill home the point that it is now an entertainment company, the company held its annual “Netflix Labs” event in LA for the first time, on the site where the first “talkie” film, The Jazz Singer, was made. This location was in preference to its corporate headquarters in Silicon Valley, where most of its technology functions are based.

The company’s image overhaul comes as Amazon keeps up the pressure with its rival streaming service Prime, and as Apple prepares to enter the market. As if that weren’t enough, Netflix is also facing increased competition from Disney, which last week closed a $71.3 billion (€63.2 billion) deal for 21st Century Fox to create a behemoth which will be able to offer content including Star Wars, Avatar and The Simpsons.

If Netflix is concerned, it was doing a good job of downplaying the threat last week.

“These are amazing, large, well-funded companies with very significant efforts,” said Hastings. “They are going to do some great shows. I’m going to be envious. They’re going to come up with some great ideas. We’re going to want to borrow those,” he added.

Founded in 1997 by Hastings and Marc Randolph as an online DVD rental service, Netflix now has about 140 million subscribers or “members” as it likes to call them.

Netflix is now available in 190 countries and is producing content in more than 30 countries. It supports more than 1,700 different types of devices, including smart TVs, streaming media players, game consoles, set-top boxes, smartphones and tablets.

Each viewer essentially gets their own homescreen when they log in to Netflix. That has proven controversial with some subscribers claiming to have been given personalised screens based on race, gender, or ethnicity. The company has consistently denied looking at demographics when personalising homescreens, saying the content presented is only based on a member’s viewing history.

It’s hard to believe it is only six years since Netflix started green-lighting its own content with House of Cards. Since then, it has had a string of hits, including Orange is the New Black, The Crown, Stranger Things and, most recently, Russian Doll.

The company has also increasingly won over major talent such as the Coen Brothers and Martin Scorsese, whose latest movie The Irishman, will be coming out on Netflix later this year. Its Oscar tally meanwhile doubled to six last month as it scored three awards for Alfonso Cuarón’s Roma.

Chief product officer Greg Peters said the company is keen to invest in more original content from outside Hollywood with a particular focus on stories from non-English-speaking countries.

“We’re trying to grow our non-Hollywood offering as rapidly as we can. I’m really optimistic that we will see plenty of big blockbusters like Case de Papel that can travel the world over,” Peters told The Irish Times.

“The primary purpose in backing these shows initially was to satisfy the members in that particular country, but then we realised that we could unlock audiences around the world with them,” he added, citing a number of examples, including the Korean zombie period piece Kingdom, which has also won audiences across India, Russia and the United States.

As Peters notes, only about 5 per cent of the world’s population speak English natively but historically most content has been designed for them, rather than for a wider audience.

“It’s in that disconnect that we see a tremendous opportunity, because we believe that great stories should be able to come from anywhere on the planet,” said Peters.

He adds that by making foreign-language shows more accessible, including through dubbing them into English instead of just offering them with subtitles, the programmes can reach larger audiences.

He cites the case of Narcos, which to most people is considered a Spanish-language series, but in the US was mostly watched by people in English.

“I’m quite confident that what we’ll see over the next five to 10 years is that people who have never watched ‘foreign’ drama will be watching it,” said Peters.

Interactive content is another key area of interest for Netflix. The company pioneered it with Puss in Book: Trapped in an Epic Tale, an animated show for children that featured 13 different storyline choices and two endings. It followed it up with three other titles for kids before surprising audiences with Black Mirror’s Bandersnatch in December.

“It was a big experience for us when we put out that Black Mirror because it was our first interactive story for grown-ups,” said Todd Yellin, vice president of product.

The reaction was largely positive and Netflix is following up with more interactive shows, including You vs Wild in which viewers get to join survival expert Bear Grylls on his adventures and make key decisions about what he eats, encounters and experiences.

“We’re gonna try now a bunch of interactive titles, and we’ll see how it plays out because we wanna keep on expanding and innovating in the storytelling universe,” said Yellin.

Another new interactive title is Battle Kitty, a new animated show for children created by Matt Layzell, who has previously worked on shows for Cartoon Network and Nickelodeon.

“We’re using the ‘choose your own adventure’ technology but instead of using it within episodes are focused instead on maximising it to turn the time between them into a fun, interactive experience that keeps you in the world of the show,” he said.

If subscribers like Netflix then so does the talent. Layzell was among a number of creatives who spoke highly of Netflix’s “hands-off” approach.

“One of the great things about working with them is that they aren’t focused on us targeting particular age groups or demographics,” he said.

His viewpoint was echoed by Chris Nee, the creator of Disney’s hugely popular Doc McStuffin. She recently signed a multi-year deal with Netflix and cited its collaborative environment as a key selling point for her.

“If there are five of you in development at the same time traditionally, you know that only one of you is going to get the key time slot for your show and so even with friends and colleagues you’re busy competing with each other. Because we all get a viable slot [on Netflix], instead of competing we can be more invested in helping others find their creative voices,” said Nee.

For Keith Scholey, producer of Our Planet, the new David Attenborough documentary series debuting on Netflix next month, the choice was more straightforward.

“With this series, the ambition was to reach as many people as possible as quickly as possible to tell them about how wonderful the natural world is, but also that it’s in trouble and we need to fix it and are running out of time, so Netflix was the perfect partner because you’re reaching people in every country in the world,” he said.

“Also, once those shows are there, they are there all the time so you can actually start a conversation between the audience and the series that goes on and on and on. We believe that actually if you want to bring about change, that’s what you have to do.”