Wizz Air drops plans to increase capacity to 80% next quarter 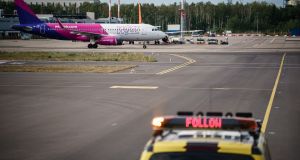 The setback comes just weeks after Wizz said it would ramp up flights.

Wizz Air Holdings dropped plans to increase capacity to 80 per cent next quarter, hitting the brakes on an aggressive return to the skies after new travel restrictions were enacted in Europe.

The Hungarian carrier will hold at its current 60 per cent level for the period ending in December if stricter measures continue, including in its home country, it said Tuesday in a statement. Further reductions are possible and Wizz could park some of its fleet over winter to save cash, it said.

The setback comes just weeks after Wizz said it would ramp up flights, taking advantage of Europe’s lowest cost base among carriers to grab share.

Where other carriers have trimmed their fleets, Wizz has signalled its intention to keep growing, targeting a 20-jet base at London Gatwick airport in the next year.

New measures in Hungary have forced a rethink of Wizz Air’s plans. The Eastern European country has closed its borders to all foreign travellers in a bid to keep Covid-19 infection rates under control.

That’s putting a dent in demand in the region, as well as traffic to the UK. From Tuesday, UK nationals -- with some exceptions -- aren’t allowed to enter Hungary unless they have a residence permit or visa, or are traveling with a family member who is a resident of the country, according to the UK government’s website.

Other European discount carriers are pausing their restart after a resurgence of Covid-19 cases and fresh restrictions. Last month, Ryanair Holdings, Europe’s biggest discount carrier, slashed capacity by 20 per cent for September and October after demand weakened.

Wizz Air has been expanding westward from its Eastern Europe heartland, driven in part by ferrying workers flying to and from Western Europe. It has a fleet of 127 Airbus SE A320 family jets, with carrier plans to increase the number to 275 by March 2027.

The carrier continues to plant itself in the UK. On Tuesday, Wizz announced that it will add another aircraft to its base at Sheffield airport, which it will use to operate services to Spain, Portugal and the Netherlands from October 22nd. – Bloomberg