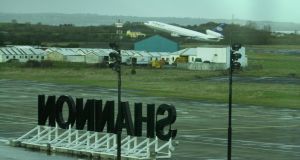 Government support for airlines must be tied to them committing to boost regional routes from the Republic, Limerick Chamber of Commerce said on Tuesday.

Dee Ryan, the business group’s chief executive, called for a plan to ensure that Shannon Airport and its surrounding regions are primed for any recovery in global aviation.

She noted that the chamber “believes it is essential that any Government subsidies or support to airlines will be contingent upon commitments from airlines to increase regional route connectivity”.

Ms Ryan said businesses were deeply concerned at reports that Aer Lingus was considering moving two aircraft used to fly to Boston, New York and Heathrow from Shannon to the UK.

The move would throw a question mark over the airline’s transatlantic services from Shannon. Research shows that the transatlantic routes support multinational investment and tourism in the region.

“We call on the airline, the Government and the airport to come together for meaningful discussions to ensure that the best possible solution for everyone is found,” said Ms Ryan.