Chairwoman of Shannon Group steps down from role 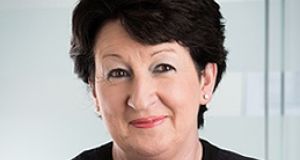 Rose Hynes: Saluted as having given “immense service . . . through her commitment to Shannon Group”.

Shannon Group chairwoman Rose Hynes is stepping down from the State company’s board following six years in the role.

Board member Kathryn O’Leary Higgins, who chaired its health, safety, security and environment committee, also left on Friday as her term came to an end.

Ms Hynes originally joined the Shannon Airport Authority board in 2003, when it was still part of State enterprise Aer Rianta, now called DAA.

She was appointed founding chairwoman of Shannon Airport, and later Shannon Group, when it was established in 2014, after it separated from DAA.

The group said on Friday that Ms Hynes oversaw a strategy for Shannon Airport that, in its first year, ended a half-decade of decline that preceded separation.

Shannon Group added that the airport grew in six out of the seven years that followed.

Ms Hynes oversaw the establishment of the Shannon Group, which merged the airport, a property business, and tourist attractions including Bunratty Castle, into one operation.

Shannon Group chief executive Mary Considine said: “Rose Hynes has given immense service to this region through her commitment to Shannon Group.”