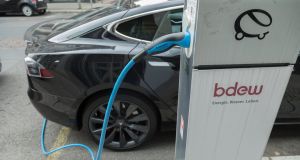 European carmakers, faced with a sharp decline in overall demand for their legacy products in the wake of the Covid-19 crisis, are set to unveil dozens of new electric cars over the next few years.

Electric cars will remain significantly more expensive for European carmakers to produce than combustion engine models for at least a decade, according to new research.

Data compiled by consultancy Oliver Wyman found that while the total cost of manufacturing a compact emissions-free vehicle will fall by more than a fifth by 2030, to € 16,000 this will still represent a 9 per cent gap when compared with petrol or diesel models.

The findings highlight the threat to the profit margins of groups including Germany’s Volkswagen and France’s PSA, even as the price of electric car batteries – their most expensive component – is set to almost halve over the next few years.

European carmakers, faced with a sharp decline in overall demand for their legacy products in the wake of the Covid-19 crisis, are set to unveil dozens of new electric cars over the next few years.

“There can be money made from electric vehicles, but it will be lower than [petrol and diesel models] historically,” said Simon Schnurrer, an automotive partner at Oliver Wyman.

“On the other hand, combustion engine models are getting more expensive,” he added, largely owing to demand for luxurious interiors and more sustainably sourced materials, while advances in battery technology and production will bring down the cost of producing electric cars.

The cost of assembling a compact petrol or diesel car is not expected to fall by much as carmakers focus their investments on fine-tuning the production lines for emissions-free cars, which also benefit from a simpler structure and contain fewer components.

As a result, electric models will be cheaper to manufacture “at some point, and not far beyond 2030,” Mr Schnurrer said.

The cost of a 50kWh battery will fall from the current average of €8,000 to approximately € 4,300 by the end of the decade, the research found, thanks to increased scale and the completion of several new so-called “gigafactories” across Europe and Asia.

Potential breakthroughs in battery development, such as the rise of solid-state technology as a replacement for lithium-ion, could bring down costs even further.

The data also showed that car manufacturers would be forced to cede some of the value chain to suppliers, particularly so-called Tier 3 companies, who often specialise in individual components, including semiconductors or materials such as cobalt and nickel for batteries.

As carmakers seek to bring down costs, their “research and development resources are stretched to the limit,” Mr Schnurrer said, forcing them to rely more heavily on smaller suppliers.

Despite higher production costs, compact electric cars are often already sold for less than combustion engine models in Europe, thanks in part to large subsidies in several countries. – Copyright The Financial Times Limited 2020