Porsche presses on with electric vehicle launches as it battles Tesla 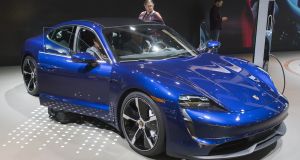 Porsche will press ahead with the launch of new electric models in the US despite sales in the country dropping by a fifth during the coronavirus crisis as the carmaker steps up plans to take on Tesla.

“We haven’t got a plan to postpone anything in [America], and that’s true for other countries as well,” Oliver Blume, Porsche’s chief executive, told the Financial Times.

But he added that current projections were based on there being no “second wave” of Covid-19 infections.

Last year, the German luxury carmaker, which accounts for more than a quarter of parent Volkswagen’s profits, unveiled its flagship electric sports car, the Taycan, designed to compete with Tesla’s Model S.

The Taycan 4S has been on sale in Tesla’s home market since the start of the year but, overall, Porsche sales in the US dropped 20 per cent in the first six months of the year, as the pandemic led to the shutdown of showrooms.

Sales in Europe fell 18 per cent in the same period.

Despite reversing sales, Porsche will not postpone the launches of electric versions of the Macan sport utility vehicle, Mr Blume said, as well as further Taycan variants, including a cheaper base model.

However, the Taycan Cross Turismo, an estate version that had an original launch date for the end of the year, will be delayed until 2021 as Porsche attempts to improve its “break-even point”, where it starts to make profits, in the wake of the crisis.

The Stuttgart-based carmaker posted an operating profit of €1.2 billion in the first half of the year, despite lockdowns in several countries causing delays to deliveries and a prolonged shutdown of its plants in Zuffenhausen and Leipzig.

Porsche’s global sales grew by almost 18 per cent on an annual basis in July, helped by demand for the Taycan and Cayenne models.

Although the company scrapped its target of achieving a 15 per cent profit margin, Mr Blume said Porsche, which on Thursday unveiled a new hybrid version of its Panamera model, was “doing everything we can to achieve a two-figure return on sales again in 2020”.

“No other European automotive manufacturer has been able to generate as much profit as Porsche in the first six months of 2020,” he added.

The luxury brand was helped by a remarkable recovery in China, its single biggest market, where sales dropped by just 7 per cent from January to June, compared with a 12 per cent decline worldwide.

Business in the country has since improved further, Mr Blume revealed. “We are nearly at the same level as in 2019,” he said, adding that he expected China to account for 30 per cent of Porsche’s sales this year.