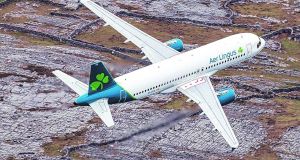 Manchester and Edinburgh are among six regional UK airports bidding to have the Aer Lingus craft for transatlantic services. Photograph: Frank Grealish

Businesses in the mid-west fear the potential loss of Aer Lingus transatlantic services will damage the region’s economic recovery.

Aer Lingus is considering moving two Airbus A321 LR craft, used to fly to Boston, New York and Heathrow, to the UK from where they will provide transatlantic services next year.

Dee Ryan, chief executive of Limerick Chamber of Commerce, said the news sparked further anxiety in the region about its prospects of recovering from the economic damage done by Covid-19.

She pointed out that research by the chamber last year highlighted the importance of strategic air routes to the mid-west, which depends heavily on multinational employers and tourism.

Ms Ryan argued that the Government had to act now to reshape the Republic’s air links to bring them in line with the regional development goals set out in Ireland 2040, the national development plan.

“It’s vital that the regional imbalances already facing this country are not worsened by Covid-19,” she warned.

The chamber chief also noted that different companies within State-owned Shannon Group, responsible for the airport, cannot cross-subsidise that business.

She suggested allowing the other units cross-subsidise the airport. “So that when public health advice on travel changes, it can resource the airport’s quick recovery,” Ms Ryan explained.

Meanwhile, Kieran O’Donnell, Fine Gael TD for Limerick City, urged the Government, Aer Lingus and Shannon Group to work to guarantee the future of the Heathrow and transatlantic routes.

Mr O’Donnell said he had written to the chief executive of Aer Lingus, Seán Doyle, and of Shannon Group, Mary Considine, as well as to the two Ministers responsible, Eamon Ryan TD and Hildegarde Naughton TD.

“I have tried to put a structure in place to allow intensive discussions take place on getting the Heathrow route back and the transatlantic routes back,” he said.

Mr O’Donnell added that his priority was to set out a roadmap to restoring the routes within the guidelines of public health advice.

The Aer Lingus craft have been mothballed since March. Manchester and Edinburgh are among six regional UK airports bidding to have them based there to operate transatlantic services.

If the airline reaches agreement with one of the airports, the service would begin in 2021 and continue for an initial three years.

It is understood that the move would not rule out Aer Lingus moving other craft to Shannon to fly the US and Heathrow routes, if conditions allowed this.

Both Aer Lingus and Shannon Group have called on the Government to implement the recommendations of the Task Force on Aviation Recovery, which include lifting tough air travel restrictions.