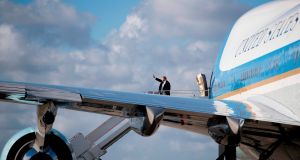 US president Donald Trump has reached an agreement with the Boeing to provide two Air Force One planes for $3.9 billion (€3.2bn), the White House said on Tuesday.

“President Trump has reached an informal deal with Boeing on a fixed-price contract for the new Air Force One programme,” deputy press secretary Hogan Gidley said. He said the contract would save taxpayers more than $1.4 billion, but those savings could not be independently confirmed.

Mr Trump has said Boeing’s costs to build replacements for Air Force One aircraft – one of the most visible symbols of the US presidency – were too high, and urged the federal government in a tweet to “cancel order!”

The Boeing 747-8s are designed to be an airborne White House able to fly in worst-case security scenarios, such as nuclear war, and are modified with military avionics, advanced communications and a self-defence system.

“President Trump negotiated a good deal on behalf of the American people,” Boeing said in a news release.