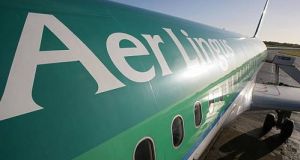 Aer Lingus and Dublin Airport have broadly agreed on the facilities that the airline needs to continue developing its transatlantic business from the airport, the carrier’s chief executive Stephen Kavanagh says.

The Irish carrier grew profits by 15.5 per cent last year to €269 million, according to its parent, International Consolidated Airlines’ Group (IAG). Revenues at the Irish airline rose 5.3 per cent to €1.86 billion.

Aer Lingus warned last year that bottlenecks at Dublin Airport were hindering its efforts to continue developing its business there as a hub for flights between Europe and North America, sparking a row between the pair.

Speaking after IAG published its results on Friday, Mr Kavanagh said he had since had “excellent” discussions with Dalton Phillips, chief executive of Dublin Airport’s parent, State-owned DAA.

“We now have broad agreement on the terms of where and how Aer Lingus’s ambitions can be fulfilled. We have agreed on the type of infrastructure that we need.”

“We did experience some operational challenges during the peak summer period last year. Our concern relates to our plans for the future if we continue to grow as we have been and want to,” he said earlier on Friday.

“We have made some significant aircraft orders – then we’re looking at a very significant bottleneck unless steps are taken now.”

The Commission for Aviation Regulation (CAR), which sets Dublin Airport’s passenger charges, recently indicated that it was considering providing €267.5 million for extra spending by DAA. However, both Mr Walsh and Mr Kavanagh indicated that they did not want to see this translated into passenger charge increases.

The Aer Lingus chief executive argued that DAA would benefit from extra passengers if it added to the airport’s infrastructure.

Mr Walsh pointed out that there was nothing stopping DAA building new infrastructure which would help it attract more business. “If we are going to sit back and say we will only buy new aircraft if you guarantee us in advance that we put up our prices, then there would be no airlines,” he said.

IAG noted that overall Aer Lingus passenger revenues rose, but fell on an individual basis as the airline boosted capacity and dealt with increased competition.

Aer Lingus added a new Airbus A330 to its long-haul fleet during the year, while 2017’s figures also reflected the full-year impact of an additional A330 delivered during 2016.

The airline is considering acquiring another Airbus A330 to bring its long-haul fleet to 14.

The airline plans new services from Dublin to Philadelphia and Seattle this year. Mr Kavanagh pointed out that adding the extra craft to the fleet would allow it work the existing 13 craft harder.

The group said it would return €500 million to shareholders during 2018 in its second share buyback in two years, as it also lifted its full-year dividend by 15 per cent to 27 cent per share.

IAG’s airlines last year benefited from strong travel demand thanks to robust economies and low oil prices, and the company said it expected to continue to grow.

“Our confidence in IAG’s future remains undaunted, and today we’re announcing our intention to undertake a share buyback,” Mr Walsh said in a statement on Friday.

With fuel prices set to rise this year, and investors fretting over wage inflation, there is more pressure on airlines to show that they can keep costs down. IAG said it expected to improve its unit costs excluding the price of fuel this year on a constant currency basis. – Additional reporting Reuters

1 How much state pension will I get next year?
2 Oxford Covid vaccine trials offer hope for elderly
3 Apple planning updates to its AirPods earbuds next year
4 Ulster Bank to introduce new card payment controls on app
5 Investors unnerved by Brexit, Covid-19 and US election jitters
6 Some Irish money market funds came close to danger in March
7 Hurrah for the companies giving staff more time off
8 How long can Government afford to keep State pension age at 66?
9 Covid-19 will worsen shortage of accountants, says CPA Ireland
10 In praise of Gogglebox Ireland, an essential service in all but name
Real news has value SUBSCRIBE