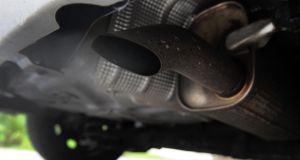 A German court has delayed a ruling on whether major cities can ban heavily polluting diesel cars, which could hit the resale value of up to 15 million vehicles in Europe’s largest car market and force automakers to pay for costly modifications.

Judge Andreas Korbmacher said on Thursday that the country’s highest federal administrative court would rule on February 27th on an appeal brought by German states against bans imposed by local courts in Stuttgart and Düsseldorf over poor air quality. “We still see a considerable need for guidance,” he said before breaking off the Leipzig court hearing, responding to a question about whether the European Court of Justice may have to be consulted on the matter. The ECJ was not immediately available for comment.

A European Commission spokesman, Margaritis Schinas, said on Thursday that the commission was not in charge of traffic regulations in cities. “We don’t view this as a case when we have community competence or we have something meaningful to offer.”

There has been a global backlash against diesel-engine cars since Volkswagen admitted in 2015 to cheating US exhaust tests, meant to limit emissions of particulate matter and nitrogen oxide, known to cause respiratory disease. Although other countries are also considering restrictions on diesel cars, bans in the birthplace of the modern automobile would be a new blow for the car industry and an embarrassment for Chancellor Angela Merkel’s government, which has backed it.

The Leipzig court is due to rule on whether bans imposed by local courts are legal after an environmental group, DUH, sued city authorities. The DUH is also seeking bans in other German cities. “Everything is still open, but we are much more optimistic,” DUH chief Jürgen Resch said after Thursday’s proceedings, noting the judge had made clear that European pollution limits were not negotiable and must be complied with quickly. “We are convinced that the court will make its own decision. And we also want a national decision.”

Germany has long promoted diesel to help cut carbon-dioxide emissions and meet climate-change goals, but the Volkswagen scandal has pushed its carmakers to step up spending on electric cars, as well as investments into making diesel engines cleaner. During proceedings in Leipzig on Thursday, lawyers discussed whether the government would have to introduce a new way of labelling cars to enable authorities to enforce any bans. Merkel’s government, which has come under fire for its close ties to the car industry, has lobbied against bans, fearing they could anger millions of drivers and disrupt traffic in cities, with public transport not in a position to take up the slack. – Bloomberg