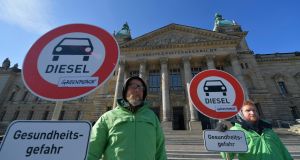 A protest outside the German court in Leipzig that heard the case on cities banning diesel cars.

Germany’s top administrative court has ruled that German cities have the right to ban diesel cars, in a move that could have far-reaching consequences for the owners of some 12 million vehicles in Europe’s largest auto market.

A national court in Leipzig upheld earlier decisions from lower courts in Stuttgart and Düsseldorf, which had allowed the bans. Those rulings had been appealed amid legal uncertainty over whether municipalities have the power to make such restrictions.

The court on Tuesday ordered the German cities of Stuttgart and Düsseldorf to amend their anti-pollution plans, saying city bans could be implemented even without nationwide rules.

The shares of German automakers Volkswagen, Daimler and BMW slipped after the ruling, trading down 1.4 per cent, 0.3 per cent and 0.6 per cent, respectively.

The closely-watched case followed a debate triggered by Volkswagen’s diesel emissions scandal in 2015, in which the carmaker admitted to installing cheat software to trick lab tests of emissions. As a result of that admission, a wider array of older diesel cars came under scrutiny, leading some politicians at the local level to decide that older, less clean vehicles should be barred from their cities.

The court said that Stuttgart – birthplace of the combustion engine and home of Mercedes-maker Daimler – should consider gradually imposing a year-round ban for all older diesel models, as well as some even older petrol models.

However, it said cars which meet Euro-5 emissions standards should not be excluded until September 1st, 2019, four years after the introduction of the latest Euro-6 standards. Stuttgart should allow exemptions for tradesmen and some residents, it added.

Automakers could still try to avert a ban by agreeing to upgrade exhaust cleaning systems of older diesels, German motorists club ADAC said, calling on the government to pass legislation allowing that swiftly. Of the 15 million diesel cars on Germany’s roads, only 2.7 million have Euro-6 standards technology.

The share of diesel cars in overall vehicle production in Europe could be cut to 27 per cent by 2025 from 52 per cent in 2015, Barclays forecasts.

The German government had sought to avert driving bans by pushing automakers to agree to overhaul software on 5.3 million diesel cars and offer trade-in incentives for older models.

But environmental groups have lobbied for improvements to exhaust cleaning systems for cars with Euro-6 and Euro-5 standards, which analysts have estimated could cost up to €14.5 billion for just Euro-5 diesels.

An outright ban could also slash resale prices, which are used to price leasing and finance contracts. The government has begun work on legal changes to permit driving bans on certain routes on an emergency basis, transport ministry documents showed.

The case in Leipzig was brought by environmental lawyers representing ClientEarth and Deutsche Umwelthilfe, or DUH, who together have filed 10 separate cases in the country.

ClientEarth lawyer Ugo Taddei called the decision “a tremendous result for people’s health in Germany” which may also have an impact abroad.

“This ruling gives long-awaited legal clarity that diesel restrictions are legally permissible and will unavoidably start a domino effect across the country, with implications for our other legal cases,” he said just after the decision. “Putting traffic restrictions on the most polluting vehicles is the quickest and most effective way to protect people from harmful air pollution.”

Last November, after car executives and politicians held a “diesel summit” to discuss the problem of older vehicles, German governments at the city, state and national level agreed to invest €1 billion on environmental remediation efforts as part of a deal to avoid bans on older diesel cars.

The outcome was deemed a failure by Jürgen Resch, head of the DUH, who accused chancellor Angela Merkel of “submitting” to the car industry.

A key risk for the carmakers is that bans in various cities could force them to retrofit expensive hardware solutions to reduce emissions of nitrogen dioxide in millions of cars. So far, Volkswagen, BMW and Daimler have agreed only to pay for less expensive software upgrades.

The ruling could have wider implications. Paris, Madrid, Mexico City and Athens have said they plan to ban diesel vehicles from city centres by 2025, while the mayor of Copenhagen wants to ban new diesel cars from entering the city as soon as next year.

Sales of diesel cars have been falling fast in Europe since the Volkswagen scandal, with fears of driving bans sending demand sharply down in Germany in the last year.

Arndt Ellinghorst, analyst at Evercore ISI, warned before the ruling that a decision in favour of diesel bans could “open Pandora’s box” by forcing carmakers to invest billions of euro in older technology just as they try to focus their resources into new electric, autonomous and digital technologies.

In one government-sponsored analysis by the Technical University in Munich, the cost of retrofits designed to reduce NOx emissions by 90 per cent would be about €1,300 per vehicle. A separate calculation by Volkswagen put the cost at €2,500 per case, he noted.

Based on these estimates, the total cost of fixing about 5.8 million older diesel cars in Germany would be between €7.6 billion and €14.5 billion.

“Diesel might get its final kiss of death from a court ruling,” Mr Ellinghorst said.

The German crackdown on diesel came as Virginia Raggi, the mayor of Rome from the anti-establishment Five Star Movement, announced that the Italian capital would ban diesel vehicles from the city centre starting in 2024.

“If we want to intervene seriously, we need the courage to adopt strong measures,” Ms Raggi wrote in a blog post. “We need to act on the causes and not just effects.”

Ms Raggi’s move came just days before the Italian election, in which Five Star is expected to be the strongest single party but is unlikely to have enough seats to form a government.

Environmental protection has been core to Five Star’s platform since it was founded in 2009 by comedian Beppe Grillo. – Financial Times Limited 2018/Reuters