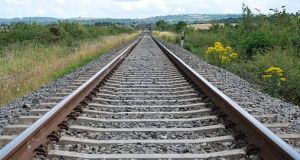 As part of plans to create a high-speed Dublin-Belfast rail network, Irish Rail wants to reduce the journey time from two hours and 15 minutes to less than two hours and eventually 90 minutes. Photograph: Getty Images

Irish Rail is considering ways of conducting Border checks on board the Dublin-Belfast train using technology under contingency plans for a “hard Brexit”.

The company is assessing whether the train’s on-board “service officer” who will later this year start using electronic tablets to provide information to passengers can also use them to check passports post-Brexit.

“There is no reason why any cross-Border checks couldn’t be part of that in a future world that is post-Brexit,” Gerry Culligan, Irish Rail commercial director, told The Irish Times at a conference in Dublin on Brexit and infrastructure.

The Irish Rail executive told the conference, hosted by the British Irish Chamber of Commerce, that in the event of Border checks being introduced after the UK quits the EU in March 2019, the company was looking at whether passengers could be cleared on board or before they board in Dublin and Belfast. “There are areas that have been dusted down and relooked at it,” he said.

Minister for Planning Eoghan Murphy told reporters the Government had based the €116 billion National Development Plan for infrastructure on mid-level growth so that it could be achieved “regardless of whether or not Brexit is a hard Brexit, soft Brexit, an orderly Brexit or a disorderly Brexit”.

Anne Graham, chief executive of the National Transport Authority, told the conference that the proposed Metro Link rail line running from north Co Dublin to the south Dublin suburbs – a key project in the Government’s Project Ireland 2040 plan – would go to public consultation over the next couple of weeks.

Department of Communications official Fergal Mulligan, who is in charge of rolling out the Government’s national broadband plan, called for a centralised project management office with powers to prioritise certain projects over others, instead of leaving the timetable for Ministers to decide.

Irish Rail is awaiting a report by the Irish Maritime Development Office to consider, as part of its Brexit planning, the full extent of traffic through the vital “land-bridge” transport link to Europe through the UK. There was “a dearth of data” on the scale and size of traffic on this link, Mr Culligan said.

The company is assessing the potential for Rosslare and Waterford ports in the southeast to provide a direct ferry link to continental Europe under “a significantly hard Brexit”.

As part of plans to create a high-speed Dublin-Belfast rail network, the company wants to reduce the journey time from two hours and 15 minutes to less than two hours and eventually to 90 minutes.

Mr Culligan said the electrification and extension of the Dart line to Drogheda under the 10-year National Development Plan created a longer term opportunity to electrify the line north to Belfast.