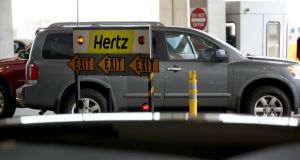 Hertz, the car rental group backed by US billionaire businessman Carl Icahn, has staved off bankruptcy after striking a deal with lenders to extend a crucial payment deadline.

The company missed a payment to lenders in April for the leasing costs of some of its vehicles. After an extension until May 4th was granted, Hertz reached a deal on Tuesday to move the payment date to May 22th.

The extra time provides a breathing space to the rental car provider as it tackles the collapse of its business in the face of the coronavirus pandemic.

In a filing to the Securities and Exchange Commission, Hertz said it aimed to “develop a financing strategy and structure that better reflects the economic impact” of the crisis.

The group, in which Mr Icahn is the biggest shareholder with 39 per cent, experienced “a rapid, sudden and dramatic negative impact on” its business, it added.

This has halted holiday and business travel, the company’s lifeline, raising questions about the short-term viability of the sector.

Had it not delayed the payments, one option Hertz was considering was filing for bankruptcy, according to two people familiar with the business.

Its payment deal comes after rival Avis posted a net loss of $158 million (€146 million) for the first quarter of the year, with sales falling 9 per cent to $1.8 billion.

The group told investors it did not expect sales to stop falling at least until June, while any recovery to pre-coronavirus levels were dependent on the return of the airline industry.

Car rentals largely depend on airports for profits in the US and across Europe, which account for two-thirds of their business. Consequently, they have been hit hard by the collapse in flight numbers.

The business models of US operators are also heavily exposed to changes in used-car prices, because the companies own the vehicles and have to account for their depreciation.

A faster than expected fall in used-car prices forces rental groups to put up cash at the end of each quarter in additional collateral, something that threatens to sap the liquidity across the sector.

Hertz cut 10,000 jobs, more than a quarter of its US workforce, last month because of the impending slump in holiday or travel rentals.

Before the virus hit, Hertz was in the latest stages of a turnround plan designed to stem losses and help it match rival Avis in market value.

Despite posting record revenues last year, the group was still lossmaking, recording a net loss of $58 million, down from $225m in 2018. – Copyright The Financial Times Limited 2020

1 My aunt never told us that Gran passed away with no will
2 Green Party TD queries ‘usefulness’ of another appeal in €13bn Apple tax case
3 Government to push through €2bn credit guarantee scheme next week
4 If it’s safe to do so, could this be the time to spend for Ireland?
5 Brussels plans attack on low-tax member states
6 Majority of employees don’t want to return to pre-Covid working patterns
7 The $6bn judgment pitting Nigeria against Irish businessmen
8 Datalex shares slide almost 24% as trading suspension is lifted
9 Covid anxiety among domestic holidaymakers could sink this summer
10 Owners of Cork shopping centre sue for €30m after car causes fire
Real news has value SUBSCRIBE