Company declined to say why change was made, but outgoing chief had opposed it 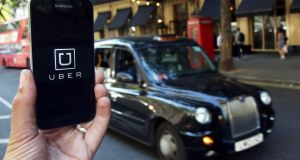 Uber also rolled out other changes on Tuesday, including paying drivers while they wait for passengers

Uber has said it will begin allowing drivers to collect tips through its smartphone app, part of the ride services company’s broader effort to improve an often-contentious relationship.

San Francisco-based Uber Technologies had for years opposed adding a tipping feature to its app despite drivers’ complaints that the extra money would help compensate for decreasing wages.

Uber drivers are independent contractors, not employees, and lack paid sick leave and vacation. They also must pay for car maintenance and other costs.

Beginning on Tuesday, drivers in Houston, Minneapolis and Seattle can collect tips, Uber said. The feature will be available to all drivers in the US by the end of July.

Uber also rolled out other changes on Tuesday, including paying drivers while they wait for passengers, as it begins a six-month push to improve drivers’ working conditions.

An Uber spokesman declined to say why the company reversed its tipping policy, though he pointed to a company blog post that called the change “long overdue”.

The company’s founder Travis Kalanick stepped down as chief executive following a series of scandals on Wednesday. Mr Kalanick had been opposed to the policy shift on tips.

Lyft, which is Uber’s chief ride-services competitor in the United States, has always allowed drivers to collect tips through its app. Lyft said on Monday its drivers have collected a total of $250 million in tips during the company’s lifetime.

In March, Uber executives outlined a series of improvements for drivers, including a new navigation system and fairer approach to reviewing driver performance. The changes come as Uber works to repair the damage to its reputation following an investigation into allegations of sexual harassment, bullying and other employee concerns.

Uber earlier this month fired 20 employees, including executives, for their behaviour.