Listing of car manufacturer would follow sports-car brand Ferrari, whose shares have more than doubled in New York trading over the past year 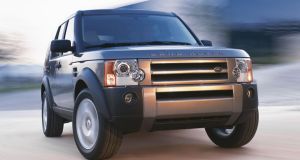 Tata Group is considering an initial public offering of Jaguar Land Rover, the luxury car-maker the Indian conglomerate bought in 2008 for $2.4 billion, people with knowledge of the matter said.

Senior Tata group officials have held preliminary internal discussions over the past few months about the potential listing of Jaguar Land Rover on an international stock exchange, according to the people, who asked not to be identified because the information is private.

The conglomerate is weighing London and New York as possible listing venues for Jaguar Land Rover, which is a unit of Tata Motors, one of the people said. A spokesman for Tata Group, which has 29 listed companies, said “there are no plans to list JLR.”

A representative for Tata Motors said “there is no truth in the information,” without elaborating. Shares of Tata Motors rose as much as 2.8 per cent in Mumbai. They traded up 2.5 per cent at 463.80 rupees, compared with the 0.2 per cent gain in the benchmark SandP BSE Sensex.

The Indian company has turned around Jaguar Land Rover since buying the business from Ford Motor Co, helping boost revenue more than sevenfold between 2008 and 2015. Deliberations are at an early stage, and Tata Group hasn’t made a final decision to pursue an IPO of the business, according to the people. Details such as timing and the potential fundraising size haven’t been set.

Selling stock would help Jaguar Land Rover fund the development of new models and investments in connected-car technologies and autonomous driving systems. A listing of the business could become one of the first major tasks for Tata Group’s new chairman, Natarajan Chandrasekaran, who took over leadership of the conglomerate in February.

Any listing of Jaguar Land Rover would follow sports-car brand Ferrari NV, whose shares have more than doubled in New York trading over the past year. Aston Martin, the British manufacturer of James Bond’s favorite vehicles, is considering a London IPO as early as next year, people familiar with the matter said last month.