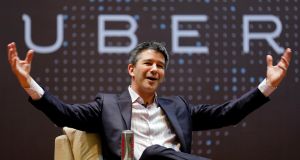 Travis Kalanick’s resignation opens questions of who may take over Uber, as the company has been moulded in his image

Travis Kalanick has stepped down as chief executive of Uber, the ride-hailing service that he helped found in 2009 and built into a transportation colossus, after a shareholder revolt made it untenable for him to stay on at the company.

Mr Kalanick’s exit came under pressure after hours of drama involving Uber’s investors, according to two people with knowledge of the situation, who asked to remain anonymous because the details are confidential.

Earlier, five of Uber’s major investors demanded that the chief executive resign immediately. The investors included one of Uber’s biggest shareholders, the venture capital firm Benchmark, which has one of its partners, Bill Gurley, on Uber’s board.

The investors made their demand for Mr Kalanick to resign in a letter delivered to the chief executive while he was in Chicago. In the letter, titled “Moving Uber Forward” and obtained by the New York Times, the investors wrote to Mr Kalanick that he must immediately leave and that the company needed a change in leadership.

Mr Kalanick (40) consulted with at least one Uber board member and after hours of discussions with some of the investors, he agreed to step down. He will remain on Uber’s board of directors.

“I love Uber more than anything in the world and at this difficult moment in my personal life I have accepted the investors request to step aside so that Uber can go back to building rather than be distracted with another fight,” Mr Kalanick said in a statement.

The move caps months of questions over the leadership of Uber, which has become a prime example of Silicon Valley start-up culture gone awry.

The company has been exposed this year as having a workplace culture that is rife with sexual harassment and discrimination, and has pushed the envelope in dealing with law enforcement and even partners.

That tone was set by Mr Kalanick, who has aggressively turned the company into the world’s dominant ride-hailing service and upended the transportation industry around the globe.

Mr Kalanick’s troubles began earlier this year after a former Uber engineer detailed what she said was sexual harassment at the company, opening the floodgates for more complaints and spurring internal investigations.

In addition, Uber has been dealing with an intellectual property lawsuit from Waymo, the self-driving car business that operates under Google’s parent company, and a federal inquiry into a software tool that Uber used to sidestep some law enforcement.

Uber has been trying to move past its difficult history, which has grown inextricably tied to Mr Kalanick. In recent months, Uber has fired more than 20 employees after an investigation into the company’s culture, embarked on major changes to professionalize its workplace, and is searching for new executives including a chief operating officer.

Mr Kalanick last week said he would take an indefinite leave of absence from Uber, partly to work on himself and to grieve for his mother, who died last month in a boating accident. He said Uber’s day-to-day management would fall to a committee of more than 10 executives.

But the shareholder letter indicates that his taking time off was not enough for some investors who have pumped millions of dollars into the ride-hailing company, which has seen its valuation swell to nearly $70 billion. For them, Mr Kalanick had to go.

The five shareholders who demanded Mr Kalanick’s resignation include some of the technology industry’s most prestigious venture capital firms, which invested in Uber at an early stage of the company’s life, as well as a mutual fund firm.

Apart from Benchmark, they are First Round Capital, Lowercase Capital, Menlo Ventures and Fidelity Investments, which together own more than a quarter of Uber’s stock. Because some of the investors hold a type of stock that endows them with an outsize number of votes, they have about 40 per cent of Uber’s voting power.

Mr Kalanick’s resignation opens questions of who may take over Uber, especially since the company has been so moulded in his image. And Mr Kalanick will probably remain a presence there as he retains control of a majority of Uber’s voting shares.

Taking a start-up chief executive to task so publicly is relatively unusual in Silicon Valley, where investors often praise entrepreneurs and their aggressiveness, especially if their companies are growing fast. It is only when those start-ups are in a precarious position or are declining that shareholders move to protect their investment.

In the case of Uber – one of the most highly valued private companies in the world – investors could lose billions of dollars if the company were to be marked down in valuation.

Uber, which has raised more than $11 billion from investors since its founding in 2009, has a wide base of shareholders apart from the ones who signed the letter. Uber’s investors also include TPG Capital, the Public Investment Fund of Saudi Arabia, mutual fund giants like BlackRock and wealthy clients of firms like Morgan Stanley and Goldman Sachs.

In the letter, in addition to Mr Kalanick’s immediate resignation, the five shareholders asked for improved oversight of the company’s board by filling two of three empty board seats with “truly independent directors.”

They also demanded that Mr Kalanick support a board-led search committee for a new chief executive, and that Uber immediately hire an experienced chief financial officer.