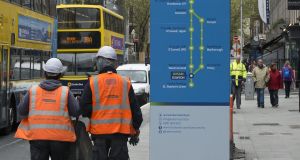 The new Luas Cross City line will be open by the beginning of December, news that business leaders in Dublin have welcomed.

Testing on the new line is due to begin this Saturday, June 17th. As part of the testing, two trams will travel on the line at speeds between 5km/h and 10km/h between St Stephen’s Green, College Green and O’Connell Street. The tests will take place in the morning between 7am and midday.

Research conducted on behalf of DublinTown, a collective of over 2,500 businesses in Dublin, has shown that 44 per cent of Dubliners are more likely to visit the city on the new line is in operation.

According to Dublin Chamber, the testing is a “major milestone in the project”.

Commenting on the news that the line will be open in time for Christmas, Mary Rose Burke, chief executive of Dublin Chamber, said: “an early December opening presents all city centre stakeholders with an opportunity to encourage people to come in and enjoy the city centre this Christmas.

“Constructing the new line has been a complicated task and has resulted in significant upheaval over the past four years.

“But it’s very much a case of short-term pain for long-term gain, with the city set to reap the benefits of the new line for decades to come,” .

DublinTown chief executive Richard Guiney has said that footfall in the city has risen each year despite the works being carried out but that “businesses can’t wait to see this much-needed transport system passing by their premises.”

Despite the progress, Ms Burke added that the Luas Cross City project can’t mark the end of infrastructure investment in Dublin. She said “it is vital” that the project is followed up by continued investment.

It is expected that tram testing will continue during the summer months.