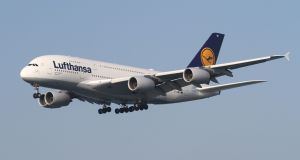 Lufthansa’s move will boost capacity on its Dublin-Frankfurt route by 30 per cent. Photograph: iStock

The carrier said on Friday that it planned to add the extra flight at the start of its winter timetable on October 29th next. The move will boost capacity on the route by 30 per cent.

Andreas Koester, Lufthansa’s senior director sales UK, Ireland and Iceland, said Dublin had been a key market for the airline.

“The demand for our services has continued to grow and we have been able to increase capacity accordingly,” he added.

Lufthansa also flies to Munich from the capital and to Frankfurt from Shannon. Its subsidiary, Swiss Air, operates a Cork-to-Geneva service.