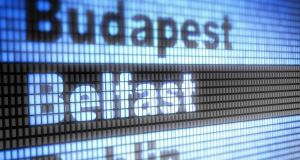 More than one million passengers travelled from the North to fly from Dublin Airport last year. Photograph: iStock

Belfast International Airport is launching a “Bexit” style campaign aimed at potential passengers from the Republic, particularly those living in Border counties, encouraging them to “Vote to Leave” via Belfast.

The airport wants to use the Brexit-themed ads to highlight the advantages of flying from Belfast because of sterling weakness against the euro.

Belfast International Airport is following in the reverse footsteps of one of its key rivals, Dublin Airport, which has enjoyed significant success with similar campaigns in the North aimed at promoting its services to Northern Ireland residents.

Mr Keddie says it is the perfect time for the Northern Ireland airport to attract new business and leisure travellers from the Republic.

We're launching advertising campaign in border areas in Rep of Ire to persuade people to use us as main airport. https://t.co/hTk7FFJPkE pic.twitter.com/bBSnZGbTFg

“The strength of the euro over the pound gives a distinct and clear advantage to southern passengers.

“We’ve been seeing a noticeable increase in the number of southern-registered cars in our car parks. We fly to 90 destinations in Europe and, at the beginning of July, Norwegian will commence trans-Atlantic services to New York and Providence (Rhode Island/Boston).

“At the other end, you can be through immigration in under 15 minutes without the congestion of Newark, JFK, Boston or the queues at pre-clearance in Dublin. Nothing could be simpler,” Mr Keddie said.

Airports in the North have been growing increasingly frustrated by the increasing number of passengers, more than a million plus each year, who travel from Northern Ireland to the Republic to fly from Dublin Airport.

In the past Mr Keddie has been very vocal about how he believes the UK’s Air Passenger Duty tax puts the North at an “enormous disadvantage”.

There is no equivalent tax on passengers flying from the Republic.

But the fall of sterling against the euro following the Brexit decision last year may prove to be a silver lining for BIA this year.

The airport recently reported a 25.2 per cent rise in passenger growth in the first four months of the year to just under 500,000.