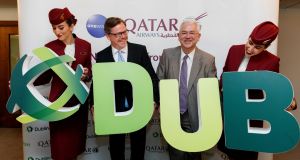 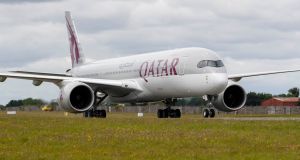 A Qatar Airways Airbus A350 lands at Dublin Airport for the launch of the inaugural Dublin to Doha route. Photograph: Andres Poveda

The launch of Qatar Airways’s first daily service from Dublin to Doha was overshadowed on Monday by the escalating dispute between Qatar and its regional neighbours.

The gulf carrier was at pains to play down the impact of the crisis, which has seen Saudi Arabia, the United Arab Emirates, Bahrain and Egypt cut off air, sea and land links with the emirate over its alleged support for terrorism.

Senior vice president of Qatar Airways Europe Jonathan Harding admitted the blockade had resulted in extended trip times from the Qatari capital Doha to other destinations because of restricted air space in neighbouring countries.

“Yes, there has been some limited impact in terms of operations. There are a handful of routes where there are restrictions in place, otherwise it’s business as usual,” he told The Irish Times. “This doesn’t impact the vast majority of our network,” he said.

However, the airline’s chief executive Akbar Al Baker earlier called on the International Civil Aviation Organisation, the main UN aviation body, to declare the measures against Qatari air traffic illegal while Qatar’s foreign minister flew to London to urge the UK to condemn the air embargo.

Despite the sanctions, the Persian Gulf’s second-largest carrier has vowed to continue with its ambitious growth plan, which will see it introduce a record 26 new destinations, including Dublin, this year.

The airline used the Dublin launch to showcase its new-generation Airbus A350, which uses lightweight composite materials and advanced aerodynamics to make it as economic as possible.

This was the first time a commercial passenger A350, Airbus’s answer to Boeing’s 787 Dreamliner, has landed on Irish soil.

Qatar, however, plans to operate the Dublin service with its Boeing 787 Dreamliner fleet.

The airline, along with Etihad and Emirates, is one of the trio of Gulf carriers that have grown rapidly over the past decade funnelling traffic through their hubs in the Gulf and on to destinations in Asia and Australia.

Mr Harding said the Dublin service would connect Irish people with more than 150 destinations globally, noting that its launch return fares from Dublin to Bangkok in Thailand and Perth in Australia would start at €500 and €987 respectively.

“This new daily service will add increased connectivity to the Middle East and beyond, offering more choice to both business and leisure travellers,” Dublin Airport managing director Vincent Harrison said.