Revenue up but no 2016 profit for firm providing Ryanair crew 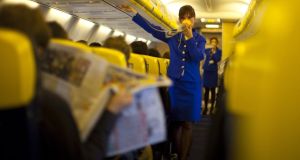 A increase in employee numbers contributed to a €33,000 loss last year at Crewlink Ireland, a company that provides cabin staff for Ryanair, the latest figures show.

Accounts for the company, which says on its website that it has more than 5,000 crew members registered with Ryanair, show that its revenue last year grew almost 20 per cent to €83.3 million from €70 million in 2015.

The figures show that costs rose sharply in 2016, growing to €79.8 million from €68 million. According to the accounts, the company increased its employee numbers last year by 20 per cent to 3,616, which contributed to Crewlink’s extra expenses.

Its wage bill rose to €79.5 million from €67.5 million. Supplementary figures filed with the accounts show that staff training costs grew to €2.7 million from €1.6 million.

This was the single biggest element of Crewlink’s administrative expenses, which jumped to €3.4 million in 2016 from €1.9 million. The company’s interest repayments also increased slightly, to €31,000 from €18,000.

The accounts show that it was owed €1.5 million by Nobox Outsourcing Ltd, a joint venture with Fingal Language Institute, another entity that provides cabin crew to Dublin-based Ryanair.

Its balance sheet shows that shareholders’ funds – net assets – fell to €40,187 at the end of 2016 from €73,636 a year previously. Along with its cash balances, total assets included almost €9.2 million owed to it by other businesses, including connected companied. It owed more than €12.7 million to its creditors.

Crewlink is based in Baldoyle in Dublin, and is owned by Frank Whelan and Judy Byrne by way of a company called Occam Management Ltd. The company has been hiring and training airline cabin crew since 2003.

It has a training centre for prospective cabin crew at Frankfurt Hahn Airport in Germany.

The group holds recruitment days in cities across Europe. It offers six-week training courses that can cost up to a reported €2,900. It gives employees the option of paying this from salaries during their first year of employment.

Crewlink says that its courses operate over a five-stage qualification to graduation process.

Fingal Language Institute operates its cabin-crew hiring and training business through a company called Dalmac. Both companies are holding recruitment days across Europe in the coming weeks.