Europcar to boost presence in low-cost market with Goldcar deal 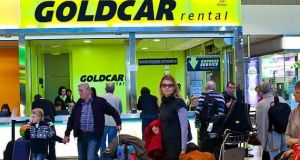 Europcar chief executive Caroline Parot said the acquisition of Goldcar was “an important step” which would bring it to “a new stage” of European influence. Photograph; Getty Images

French car rental company Europcar has announced the acquisition of Goldcar in order to bolster its presence in the low-cost and leisure markets.

The company said in December it was looking to spend up to €500 million on acquisitions to buy franchised companies, car-sharing service providers or local rivals in its existing markets in response to changes sweeping the industry.

Europcar chief executive Caroline Parot said on Monday the acquisition of Goldcar was “an important step” toward the company’s ambition, which would bring it to “a new stage” of European influence.

“This strategic acquisition will increase our exposure to three major growth engines – the Mediterranean region, the leisure segment and the low-cost segment – and to become a major player in the fast growing European low-cost segment.

“With the combination of InterRent, Buchbinder and Goldcar, we will build the platform and the scale we were aiming for in the low-cost segment.Hence, we expect our low-cost business unit to generate a significant portion of our group revenues in the future, and, more importantly, to anchor the development of the group as a whole.”

Ms Parot said the company would now focus on integrating the businesses. “This game-changing transaction confirms the major role we want to play in our industry’s European consolidation process,” she said.

“Following the acquisition of Goldcar, we intend to focus on integration, delivering the expected synergies, but also to continue to work on the digitalisation of our customer journey, the development of our footprint and the pursuit of operational excellence.”

In 2016, Goldcar generated revenues of around €240 million and an estimated adjusted corporate EBITDA (earnings before interest, taxes, depreciation, and amortization) of approximately €48 million.

The acquisition, which is expected to generate close to €30 million of cost synergies per annum by 2020, is based on a company valuation of €550 million.

“We are very excited to be joining the Europcar Group, the leading player in the European car rental industry, and look forward to bringing our entrepreneurial know-how and low-cost expertise to the group.

“Over the last years we have strived to be a game-changer in the leisure mobility space in Europe, delivering double-digit organic growth and best-in-class margins, thanks to a unique combination of scale, innovation and agility.

“In a still largely fragmented space we see plenty of opportunities to continue to grow Goldcar’s business in the future, and believe the sharing of our respective best practices and corporate strengths will help boost the combined company’s growth prospects even further.”