Tourism Ireland tees up new golf campaign at US Masters 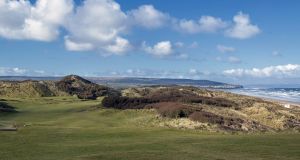 Portstewart Golf Club in Co Derry. The annual “Meet the Irish” media event at the Masters will highlight that the course will host the Irish Open in July

Tourism Ireland is hoping to capitalise on the Masters golf tournament by teeing off a new golf campaign aimed at bringing more US visitors to Ireland.

A 30-second ad will air to an estimated 6.5 million US households over the coming days on the NBC Golf Channel, while a further 1.2 million people will be targeted with messages about Irish golf holidays on Golfchannel.com

The course at Doonbeg, Co Clare, owned by Trump International Golf Links, is one of golf courses that features in the ad.

The campaign comes as the 81st Masters gets under way on Thursday in Augusta, Georgia, but it will also air later this year to coincide with other major tournaments.

Tourism Ireland said it hoped to build on its Home of Champions campaign, which reminded golfers across the US about the Irish courses where professionals such as Rory McIlroy, Pádraig Harrington, Graeme McDowell and Darren Clarke honed their skills.

The tourism promotion body is hosting its annual “Meet the Irish” media event at the Masters to promote “key messages” to US golf journalists.

It will highlight that Portstewart Golf Club will host the Irish Open this July, while the Open Championship will take place at Royal Portrush, Co Antrim, in 2019.

“Tourism Ireland has an extensive programme of promotions under way this year to highlight our world-class golf and encourage more Americans to consider a golfing vacation on the island of Ireland,” said Alison Metcalfe, Tourism Ireland’s head of North America .

Meanwhile, Ireland has been ranked 23rd in a new travel and tourism competitiveness report published by the World Economic Forum. This was down from 19th in a similar report in 2015.

While Ireland ranked 7th on “international openness”, it was 15th for “tourist service infrastructure”, 17th for “prioritisation of travel and tourism” and 28th on “air transport infrastructure”.

It also did relatively badly on a number of other metrics, notably “price competitiveness”, where it was ranked 121st out of the 136 countries included in the study.

Spain was ranked the top country for travel and tourism, followed by France and Germany.