Company is subsidiary of Jersey firm controlled by Pat Doherty 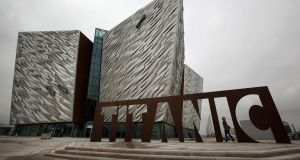 Some 638,000 people visited the Titanic Belfast attraction in the year to the end of March, 2016. Photograph: Getty

The commercial operator of Titanic Belfast, the award-winning visitor attraction, saw a jump of nearly £460,000 (€531,173) in its pretax profits last year to hit a record £1.2 million.

Titanic Belfast Limited, which also operates the SS Nomadic visitor attraction, paid a dividend of £3 million during the 12 months to the end of March 2016 compared to zero in the previous year, the company’s latest accounts show.

Titanic Belfast Limited is a subsidiary of Dockside Investments Limited which is incorporated in Jersey and controlled by Pat Doherty who is also the chairman of Titanic Quarter and Dublin-headquartered Harcourt Developments.

The accounts also show that the average number of people employed at Titanic Belfast, including directors, fell slightly to 146 in the year under review while total staff costs rose from £2.4 million to £2.6 million in 2016.

The Titanic Foundation, which is the charity that oversees the £75 million Titanic Belfast attraction, is responsible for managing the operator contract with Titanic Belfast Limited to ensure that it provides a world-class visitor experience.

The accounts for Titanic Belfast Limited show that visitors to the Titanic exhibition increased by 1 per cent in the 12 months to the end of March to 638,000. The visitor attraction secured more conference and banqueting events and business sales room hire jumped 12 per cent year on year while events revenue grew by 22 per cent.

“There continues to be strong international interest in the story of RMS Titanic’s maiden voyage being told at the birthplace of the great liner with 77 per cent of visitors coming from out of state (outside NI), directors state in their strategic report in the accounts.

They express confidence about the sustainability of Titanic Belfast, citing the appeal of its back story, the growing number of international tourists visiting the North and the professionalism of its staff as key factors in its future.

But directors also warn that any negative events for the Northern Ireland tourism industry would adversely affect its operations, as just 23 per cent of total visitors to the attraction originated in the North in the 12 months to March 2016.

During the year there was several related party transactions which the accounts highlight including a loan of £250,000 to Abercorn Construction.