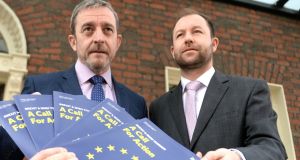 The tourism industry has called on the government to immediately provide €12 million in marketing and operator assistance to help the industry cope with the anticipated impact of Brexit on the number of UK visitors to Ireland.

The Irish Tourist Industry Confederation (Itic), the umbrella lobbying group for the industry, this morning launched a report on Brexit and Irish tourism, pitched as a “call to action” following the “inadequate” response so far.

Itic says the €8 billion industry is being “taken for granted” at cabinet level, and queried why specific Brexit supports have been made available to other sectors, such as agriculture and food, but not for tourism.

Eoghan O’Mara Walsh, Itic’s chief executive, said ministers should be “doing a hell of a lot more” to help the industry avoid any retrenchment in UK numbers.

Ireland had nearly 10 million inbound visitors in 2016, and the latest data from the Central Statistics Office doesn’t show any slowdown in UK numbers.

Paul Gallagher, general manager of Buswells hotel and the chairman of Itic, predicted that the initial effects of Brexit on UK visitors to Ireland may become apparent in data from CSO later this year.

“UK data will weaken,” he said. “If we don’t get [some State help] people will struggle.”

Itic says Brexit is the “biggest issue for tourism” since the last recession, when UK visitor numbers collapsed 23 per cent in 12 months.

UK visitors account for almost 40 per cent of the total number coming into Ireland, spending €1.3 billion with a fair regional spread. Since the Brexit vote, Ireland is 15 per cent more expensive for UK visitors due to sterling movements.

Itic highlighted in its report that State tourism agency marketing budgets in the UK have come under severe pressure in the past five years, and called for them to be reinstated.

Mr Gallagher predicted that even a 10 per cent decline in UK visitor numbers to Ireland would result in 6,000 job losses.

Itic wants an immediate increase of €12 million in the State tourism budget, with most of the cash ear-marked for the State promotion agencies to boost marketing.

It also wants a training fund for operators, a Brexit “tourism taskforce” with input into Brexit negotiations, and for the government to press for a soft border with Northern Ireland.

1 Direct sea routes to Europe offer certainty in choppy Brexit waters
2 Admission of mistake in Oxford vaccine dose raises doubts over reliability
3 There was no vaccine for Anglo: Why the last crisis was different
4 ‘I don’t need to do any of this. . .I don’t actually need to work.’
5 Promontoria barred from pursuing doctor over Ulster Bank loan
6 China’s economic growth slowest since 1993 over trade war
7 1,500 retailers gear up to reopen next week
8 Solicitor must be struck off over ‘extremely serious’ misconduct, court rules
9 Transact Campus to create 110 jobs in Limerick city
10 Keywords Studios buys US-based Gnet Media in $32m deal
Real news has value SUBSCRIBE