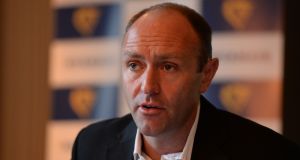 Ryanair’s Kenny Jacobs, who said it was a “disgrace” how the German union was holding travellers in the German capital to ransom. Photograph: Cyril Byrne

One of Germany’s largest unions has declared war on Ryanair after the Irish low-cost airline flew in staff to break a Berlin airport baggage-handler strike.

Ryanair flew an empty plane from Berlin’s Schönefeld airport to Dublin on Monday, bringing back staff to prepare a reported 12 Tuesday morning flights.

In retaliation, services union Verdi has vowed to launch legal action against Ryanair and hold snap strikes in future, stepping up a baggage handler strike that has hobbled the German capital’s airports for three days in the last week.

“The airline flew in its own staff that, without any security training and with day passes, are now operating on the Schönefeld apron,” said Mr Enrico Rümker, Verdi general secretary. He called on the airport operator to intervene, saying Ryanair’s tactics endanger the security of passengers and would exacerbate the pay conflict.

“When strike breakers are deployed, it will no longer be possible for us to announce strikes before they begin,” added Mr Rümker. “Until now, out of consideration to passengers, we announced the previous three strike days 18 hours in advance.”

Verdi said it had documented Ryanair staff in Berlin loading and unloading aircraft by hand, without obligatory protective gear, and had forwarded pictures to Germany’s aviation authority.

Ryanair chief marketing officer Kenny Jacobs dismissed union claims, saying it was a “disgrace” how they were holding travellers in the German capital to ransom.

He confirmed that the airline had brought staff to Berlin to dispatch Ryanair aircraft and insisted all were fully qualified and authorised ground-handling staff.

“We call on the German government to intervene and prevent any further disruption,” he said.

Almost 2000 flights have been cancelled in Berlin over the three-day work stoppage on Friday, Monday and Tuesday.

Verdi called the strike as part of its demand for a €1 pay increase to €12 an hour for its 2,000 ground staff in Berlin, and for work contracts of at least one-year duration.

An spokesman for Berlin’s Tegel and Schönefeld airports yesterday said employers and unions were “still some way away” from agreement, though Verdi has promised no further strikes for the rest of the week.