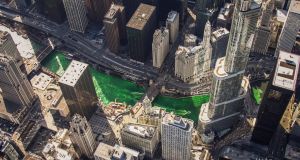 The Chicago river was dyed green on Saturday. Tourism Ireland hopes up to 300 landmarks in 40 countries will go green this year. Photograph: Lee Hogan/Chicago Sun-Times via AP

As the Irish tourism industry shapes up this week to capitalise on the global promotional opportunity of St Patrick’s Day, Tourism Ireland is warning that its latest research shows Brexit will hit Ireland-UK air capacity this summer.

Niall Gibbons, chief executive of Tourism Ireland, the all-island agency responsible for marketing Ireland abroad, said it had acquired figures “hot off the press” that were raising “concern” over Irish-UK capacity.

Mr Gibbons said Tourism Ireland regularly conducted inventory surveys with all airlines flying into Ireland, which count how many available seats there are on scheduled routes servicing the State.

“The latest inventory figures indicate that there will be 4 per cent less UK capacity coming into Ireland this season,” he said. “That is a concern no matter what way you look at it.”

He also warned over the future impact of recent cuts in its budget for marketing Ireland as a tourism destination abroad.

“The budget has been cut 45 per cent in recent years. We know that [because of this] our share of voice is declining internationally.”

Mr Gibbons said Ireland had fallen from the second most-recalled destination in Britain to number nine since the cuts had been implemented, while it was down from number one to number five in France.

He said the agency was in “constructive dialogue” with the Government about its marketing resources. Tourism Ireland is also going back to more prime time television advertising in the State’s big source markets – the US, UK, Germany and France – to shore up its marketing “voice” in those countries.

Mr Gibbons was speaking ahead of the annual “greening” of international landmarks with green lights to celebrate St Patrick’s Day.

Tourism Ireland hopes up to 300 landmarks in 40 countries, such as South Africa’s Table Mountain and the Sydney Opera House, will go green this year.

There will also be new entrants on the roster this year, such as the Kigali Convention Centre in Rwanda.

Tourism Ireland arranges the greening event in the countries in which the agency has a direct presence on the ground. Otherwise, it relies on the assistance of Irish embassies.

As the landmark owners generally cover the cost of the green lighting, the expenses for Tourism Ireland are generally less than €30,000 annually. It says it received free publicity it valued at €10 million last year due to the initiative.

1 Son putting elderly dad under pressure to sign over land
2 How to gift your child a house deposit . . . tax free
3 Family in court dispute over hotels in Dublin and Galway
4 BOI customers to be charged twice with bank fees on New Year’s Eve
5 Dublin 8 investment with scope for income growth sells for €300,000
6 Running to go backwards: The problem with productivity apps
7 Ryanair warns it may reduce more Irish services and relocate operations
8 Revenues at Tayto Snacks top €100m in 2019 after ‘robust growth’
9 Stripe in talks for new funding at much higher valuation
10 Willie Walsh appointed head of the International Air Transport Association
Real news has value SUBSCRIBE