Dublin to ring in the changes for New Year’s Festival 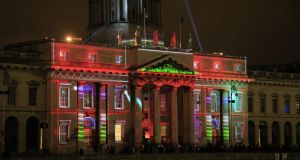 The Luminosity light show at the Custom House in Dublin, part of the 2016 New Year’s Festival. The 2017 festival will be ‘reimagined’ in a new €2.5m tender. Photograph: Nick Bradshaw

New Year’s Eve celebrations in the centre of Dublin will be “reimagined” this year in a two-day festival designed to attract more tourists.

Fáilte Ireland is inviting contractors to propose a new creative direction for the festival, which it said should have a strong emphasis on the “midnight moment” and be “participative and iconic in nature”.

This is the first time that the contracting authority, alongside Dublin City Council, has specifically sought proposals on the creative direction of the festival.

The tourist body wants the festivities in the capital to “stand out internationally” and bring in more overseas visitors over the period.

“We have gradually built up the New Year’s Festival since 2011 and now Fáilte Ireland wishes to move it to the next level and further grow international visitor numbers,” said Fáilte Ireland head of communications Alex Connolly.

The €2.5 million contract award will also be for the programming, marketing and operation of the festival.

Since 2014, the festival has been run over three days, however the tender document states that proposals for the 2017 festival should be for a two-day event.

Fáilte Ireland said it believed the event would get “more exposure and higher impact” if it was run over two days rather than stretching it over three.

In 2016, Dublin’s New Year’s Festival was attended by more than 45,000 people, while the number of attendees from overseas has increased from 5,000 to 20,000 over the five years that the festival has been run, Fáilte Ireland said.

Event management company Holohan Leisure held the contract to programme and operate the festival between 2014 and 2016, with concert promoter MCD one of the key sub-contractors.

Last year’s event featuring a 3D light projection display by Luminosity, abseilers and aerial dancers as well as the “Countdown Concert” sponsored by telecoms group Three, which was headlined by Irish band Walking on Cars. Previous headliners include The Coronas, Kodaline and Madness.

Fáilte Ireland said the tender process presented it with “an ideal opportunity to reimagine this festival”.