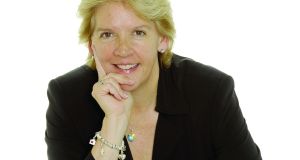 With ship staff from 60 countries, Jo Rzymowska’s job is to forge a team offering a consistently high level of service.

Jo Rzymowska is passionate about the Irish market.

“I’ve always had a love of Ireland and all things Irish, and I didn’t know why. It wasn’t until I went searching for my birth mother, who came from Charleville, Co Cork, that I discovered my genes are 100 per cent Irish.”

In her search, Rzymowska found a half-sister who was brought up in Dublin, cementing her bond with Ireland further.

Rzymowska is managing director of Celebrity Cruises for the UK and Ireland and attributes much of her love of travel and culture to her adoptive parents who gave her a rich and varied upbringing. Her father’s Polish origins and mother’s German nationality exposed Rzymowska to many languages while she was growing up. “I studied French, German and Spanish; now I can drink in all three,” she says.

Travelling a lot while growing up, Rzymowska graduated in business studies with travel tourism and languages. Subsequently, she has lived in France, Germany, Spain, Austria and Switzerland, working for major companies such as Disney, Hertz and Thomas Cook.

She was involved in the start-up of the boom and bust company Dream Ticket prior to joining Royal Caribbean Cruises Ltd as sales and marketing director, representing its three brands – Royal Caribbean International, Celebrity Cruises and Azamara Club Cruises.

When the company decided to invest in three dedicated teams two years ago, Rzymowska took over the helm of modern luxury cruise brand, Celebrity Cruises.

With ship staff from 60 countries, Rzymowska’s job is to forge a team offering a consistently high level of service. With her management colleagues, she also needs to stay one step ahead of guests in terms of their cruise preferences and expectations.

“We want them to leave the ship rejuvenated.”

Recently introduced options include fitness and health packages to shopping at port stops and cooking with the on-board chef on return to the ship.

Building a new class of ships is Celebrity Cruises’ next project. It expects the first of these four ships to come on stream in 2018, offering new levels of customer-focused innovating.

Celebrity Cruises’ ships follow the sun. The UK and Ireland are the second largest markets for Celebrity Cruises outside of America. A lot of people choose the Mediterranean itineraries during the summer and the company is currently expanding its range of overnight port stops.

“We do 30 double overnights on our current itinerary list and we have plans to start these in Dublin for the 2017 season,” says Rzymowska. “Extending our stay means that people can really enjoy the destination.”

It will impact on the hospitality and entertainment industry too, bringing more revenue to the local economy.

Last summer saw a rise in cruise ships stopping at Dublin Port. Four ships docked in one day alone, bringing an influx of visitors into the city centre with an average spend of €100 per passenger – a €1.3 million boost for the Dublin economy.

Seen as a growth industry in tourism, Rzymowska has high hopes for the future.

“Such a tiny percentage of the Irish population cruise, single digits, around 4 or 5 per cent, so there is still massive opportunity for cruising. The ocean is a big place and, as an industry, we focus in on those who haven’t yet cruised.”

Itineraries will include a 10-night Ireland and Iceland sailing calling at Belfast, the Icelandic capital Reykjavik and Akureyri, also in Iceland, as well as Lerwick/Shetland and Cork. Guests can opt for a three-night City Stay in Dublin before embarking.

It will also offer an eight-night Norwegian fjords itinerary.

In the highly competitive tourism market, it’s just one more step for an ever evolving company.