Tourism taxes in North could be slashed post-Brexit, say MPs 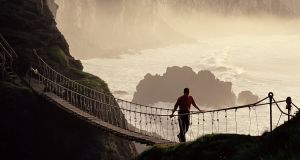 Carrick-a-Rede Rope Bridge Ballintoy, Co Antrim. Tourism-related businesses in the North pay 20 per cent VAT, compared with 9 per cent paid by their counterparts in the Republic. Photograph: Chris Hill

Tax on tourism and flights in the North could be slashed once the UK leaves the EU, an influential committee of MPs has said.

The hospitality industry pays VAT at a rate more than twice that of competitors in the Republic.EU law prevents member states from setting different levels of the charge for different regions. That power will be repatriated to the UK after Brexit.

“We are calling on the UK Government to examine options for reducing these tax burdens on tourism and creating the right environment for the sector to flourish.”

Tourism-related businesses in the North pay 20 per cent VAT, compared with 9 per cent by their counterparts in the Republic. Northern Ireland is the only part of the UK sharing a land border with another state.

The tax difference creates a competitive disadvantage where businesses in Northern Ireland are forced to reduce prices, hampering their ability to invest or risking losing out on business by being too expensive, the committee said.

New attractions like the Titanic Belfast visitor centre and Game Of Thrones tours helped establish tourism as a pillar of the economy.

The committee warned: “However, long-term growth may be at risk.”

It added: “The tourism industry in Great Britain does not face the same form of competition and the Government must now consider if a one-size-fits-all policy is any longer appropriate.”

Similar concerns exist over the impact of APD on the competitiveness of airports.

In Northern Ireland, passengers pay the £13 short haul levy while in the Republic it has been abolished.

The committee said: “There is compelling evidence that Northern Ireland’s tourism industry is missing out on significant levels of business because the region’s airports find it increasingly difficult to obtain crucial new routes.

Removing APD would incur a direct cost offset by benefits such as new routes, increased tourism and business links and a boost for the economy, the committee said.

It said the UK Government and the Northern Ireland Executive should re-examine the economic case for abolishing APD on flights to and from Northern Ireland and seek the full devolution of power over the duty, so that the decision and cost implications reside where they will be most be felt.

Cuts to APD separately from the rest of the UK would see Treasury reducing the amount it provides the devolved administration to run public services.

Stormont’s former Department of Enterprise, Trade and Investment (Deti) has said reducing APD was not a strong tool for promoting economic development.