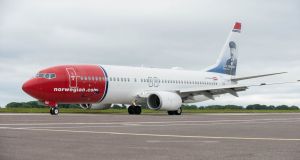 A Norwegian Air plane at Cork Airport at the launch of the company’s first transatlantic flight from Cork to the US. Photograph: Brian Lougheed

The chief financial officer of Norwegian Air, the budget carrier that is rapidly expanding its transcontinental routes, resigned on Thursday, sending the company’s share lower.

Shares in Europe’s third-largest budget carrier by passenger numbers after Ryanair and easyJet, were down 7.38 per cent by lunchtime. It was the worst performing stock on the Oslo bourse.

Frode Foss, who had been chief financial officer for 15 years, will be replaced in the interim by Norwegian Air’s head of investor relations, Tore Oestby, until a permanent replacement is named.

“When a chief financial officer quits, it creates uncertainty and it comes on top of the June traffic report,” said Swedbank analyst Hans-Marius Lee Ludvigsen.

Norwegian Air’s latest monthly report showed its yield was down 6 per cent year-on-year and its load factor, a measure of how much it is able to fill planes with passengers, was down half a percentage point.

Norwegian Air is one of several budget airlines trying to grab a slice of the profitable transatlantic business, once the preserve of more established flag carriers.

It is launching an increasing number of transatlantic flights – on Wednesday it launched direct routes between London and Chicago and Austin, and Paris to Boston and Oakland.

To grow, the airline has placed large orders for new, lightweight planes that help keep costs down, including 110 of Boeing’s 737 Max aircraft, with options for another 90; the first two were delivered on June 29th.

Securing funding to pay for these aircrafts is seen as a key task for the company.

Mr Ludvigsen, the analyst, said Mr Foss did a “very good job” as chief financial officer and that his replacement, Mr Oestby, was also a well-known name and “should be ready for the task”.

“It’s time for me to explore new ventures. I wish Norwegian all the best for the future,” Mr Foss said in a statement.

“It is understandable that he [Foss], after 15 years as chief financial officer, wants to concentrate on other tasks,” Norwegian Air chief executive Bjoern Kjos said in the same statement.