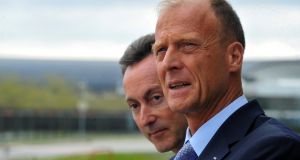 Airbus on Monday formally kicked off a leaner corporate structure under chief executive Tom Enders, following a recent merger between its parent company and its dominant planemaking arm, and confirmed a reorganisation of its commercial sales.

“Airbus will benefit from a simpler structure that enables faster decision-making, less bureaucracy, greater collaboration and increased efficiency,” it said in a statement.

Reuters reported last week that the shake-up would now see Airbus’s sales team, best known for contesting leadership of the jetliner market with Boeing, report directly to Enders instead of to Bregier.

The move is seen as sensitive because it revisits a power-sharing deal between Enders and Bregier that initially gave the Frenchman responsibility over all planemaking activities.

An Airbus spokesman confirmed the new reporting lines, saying this was a routine matter for any normal company.

In a letter to staff, Enders said that in his commercial aircraft role, Bregier would lead programmes, support and services, engineering, manufacturing, procurement and quality.

“However, due to the heavy operational challenges in our largest revenue-driving business, and to slightly rebalance our internal burden-sharing, I will lead sales and marketing.”

In his group-wide role, Bregier will oversee Airbus’s efforts to capture the power of ‘Big Data’ through ‘digitalisation’ as well as the global supply chain, he wrote.

“Only companies with lean and integrated structures will reap the full benefits of digitalisation in both their existing operational challenges and their future endeavours,” he said.

He told staff that Airbus needed to embrace the frenetic pace of change in its environment, “waving goodbye to an era in which a return to ‘stability’ was a realistic aspiration”.