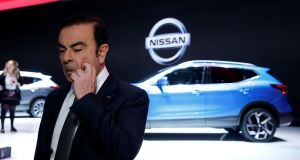 Carlos Ghosn, chairman and chief executive of Renault-Nissan said that the company aims to become a major LCV player in China. (Photograph: Reuters)

The companies agreed to invest a combined 1.5 billion yuan (€194 million) in Shenyang Brilliance Jinbei Automobile in proportion to their stakes, Brilliance said in a statement Wednesday. As part of the deal, Renault will pay 1 yuan to take a 49 per cent stake in the subsidiary. Brilliance shares gained as much as 2.3 per cent in Hong Kong trading.

Renault President Carlos Ghosn is using the company’s strength in commercial vehicles to expand in China and help rescue a struggling unit of Brilliance after having restored the fortunes of industry giants from France’s biggest carmaker to Japan’s Nissan Motor Shenyang Brilliance Jinbei reported losses of 1.1 billion yuan over the past two years and 3.6 billion yuan in liabilities as of the end of 2016.

“By joining hands with CBA, Groupe Renault aims at becoming a major LCV player in China,” Ghosn said Wednesday in a separate statement. He said China’s light-commercial vehicle market has high potential and accounts for more than 3 million vehicles a year.

Brilliance said the cooperation with Renault will help “turn around its existing minibus operation as well as cultivate the full potential of the LCV market in China.”

The light-commercial vehicle business has been an underperformer for parent Brilliance, which will probably report net income jumped 31 per cent to 4.8 billion yuan this year, according to average of analyst estimates.

Sales of light-commercial vehicles, also called minivans, in China came to 106,900 units in the first five months of this year, according to a note to clients from Sanford C Bernstein. Passenger vehicle sales totaled 9.4 million in the five months ended May, according to China Automotive Information Network figures.

“Whereas most investors now consider the minivan business a sizable and perpetual drag to Brilliance’s value, we’d expect today’s announcement to offer hope of a turnaround,” wrote analysts at Sanford C Bernstein. The parent company’s shares should gain “given new hopes of a Renault-led turnaround,” they wrote.

The carmakers gave no timeline for beginning production.

Brilliance also makes cars with BMW at two plants in Shenyang, including the 3-Series and 5-Series sedans, while Renault makes autos with Dongfeng Motor Group in Wuhan.