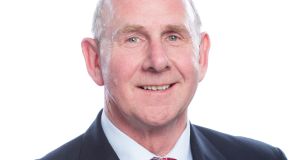 Jim Burke of GoBus: “We have seen increased demand for our services over the past 12 months with a 10 per cent growth rate during this time.”

Jim Burke joined the family transport business in 1976 and during his time with the company he learned all aspects of the trade from school transportation to private hire and extended tours.

Nearly 20 years later he went on to set up his own successful coach company, which he went on to sell to a multinational in 2002. Early retirement beckoned but as the M6 motorway neared completion he began considering the possibility of providing shorter times between the east and west coast through a new public transport service.

GoBus.ie was established in 2009 as the first scheduled non-stop motorway coach service in Ireland, operating between Galway, Dublin and Dublin Airport. It now offers 19 daily services around the country, some of which run under the GoBé brand.

Dealing with UK suppliers for the provision of our fleet means that €/£ exchange rate fluctuations can significantly impact our ability to maintain our investment levels in the business. Service load factors and associated revenues are also reviewed on a daily basis.

Despite our incorporation during a period of economic downturn, we have been extremely fortunate to have been able to establish a modest growth profile. Certainly, we have seen increased demand for our services over the past 12 months with a 10 per cent growth rate during this time.

The UK’s vote to leave the euro zone has already made an impact on our business, the adverse foreign exchange movement essentially contributed to an initial devaluing of our existing fleet. However, counteracting this, it has also contributed to lowering the market replacement cost of our new vehicles.

Reluctantly selling my original start-up business in 2002 before it had reached its true potential, for the time and energy invested in creating that venture from its inception.

Introduce a more expansive VAT regime, offering competitive, cross-sector rates to stimulate the economy, particularly with reference to the 9 per cent rate change introduced in the hospitality sector.

Not liquidating the ownership of their business when the right opportunity arises, enabling them to move on and transfer their expertise and experience into new ventures. Similarly, not being open to inward third-party investment as this also enables businesses to facilitate the transition to a higher level.

The introduction of the public service obligation tendering will open up a significant number of routes that previously were unobtainable, presenting opportunities to all operators in the market. We are also possibly going to experience growth in the Asian travel market for organised groups.

I have great admiration for the late Tony Ryan in launching Ryanair in his quest to open up the skies, enabling the mobilisation of significant new passenger numbers through the availability of no-frills air travel. In the same breath, hats off to the influence Michael O’Leary has had, for taking the business to its current level.

1 Coronavirus: Notion of a rapid economic recovery is at best wishful thinking
2 Nice to see you: Which is the best video calling option around?
3 Coronavirus applies ‘handbrake’ to Irish property market
4 Makhlouf running Central Bank from Greek lockdown
5 Covid-19 crisis puts value of the modern-day office into focus
6 Frontline bank workers to get pay top-ups during Covid-19 crisis
7 Fierce backlash to Dutch hard line on eurobonds
8 NTMA to raise billions of euro for State in bond sale amid Covid-19
9 Mater hospital turns to robots to help in battle against Covid-19
10 US authorities scrutinise Zoom’s practices as app’s traffic surges
Real news has value SUBSCRIBE