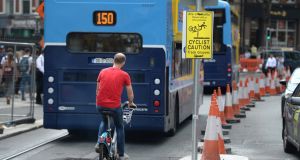 Tim Gaston, director of public transport services with the NTA, has said some city thoroughfares are not wide enough to include a tram track as well, and so cyclists may have to be directed to other routes. Photograph: Dara Mac Dónaill

The secretary general of the Department of Transport has described the construction of the Luas Cross City link-up as an “exemplar” for other similar projects.

The remarks were made as part of a question to Transport Infrastructure Ireland (TII) chief executive Michael Nolan by department secretary general Graham Doyle, who was chairing a panel discussion at the Transport Ireland conference on Wednesday.

“We can see the Luas project being delivered now is very much being delivered on time and on budget and seems to be an exemplar in terms of project delivery,” Mr Doyle said.

The new stops are due to open in December, but the project has not been without its difficulties with complaints about disruptions and noise caused by works, flooding of local businesses and even rat infestations being aired over the course of the four-year-long construction process.

Speaking in the context of TII capital investments, Mr Nolan responded that such projects cannot be evaluated solely on the basis of timely delivery, and can only be fully appraised once the expected operational benefits have been realised.

Meanwhile, the National Transport Authority (NTA) has given the strongest indication yet that some streets will indeed be closed off to cyclists altogether to avoid conflicts with tram tracks once Luas Cross City becomes operational.

A draft report compiled by the authority identified a number of city centre streets including Dawson Street, Nassau Street, Parnell Street and Marlborough Street where cycling activity may need to be curtailed when new tracks open in December.

There has been uncertainty as to the status of the draft proposals with an NTA spokeswoman saying discussions are still ongoing with TII and Dublin City Council.

Tim Gaston, director of public transport services with the NTA, noted that some thoroughfares that currently accommodate vehicle and bicycle traffic are not wide enough to include a tram track as well, and so cyclists may have to be directed to other designated routes.

“The city streets don’t really lend themselves, in some places, to having what you would like to have which is a footpath, a segregated cycling lane and bus lane. Then throw a tram into the mix as well and our streets in many places just simply aren’t wide enough. So there does have to be a compromise,” he said.

“We may have to have some streets that aren’t cycling streets, that aren’t cycle-friendly streets and cyclists may be directed on to other routes where there can be the segregated cycle route.”

He added that while motorists had a responsibility to look out for cyclists, cyclists themselves should not just “whizz through red lights” as he said many of them do.

Meanwhile, the conference was also told online consultation on the review of Dublin’s bus network has generated 7,000 responses since it was launched on June 6th. The review is one element of BusConnects, NTA’s plan to transform public transport in the Dublin region, which was published in May.

The public consultation process will conclude on Friday, with a detailed review report to be published later this year. The conference also heard criticisms of Ireland’s transport infrastructure.

Dublin Airport Authority chief development officer John Heffernan said the State “absolutely does not spend enough on transport infrastructure” and that this issue must be addressed.

Former tánaiste and Fianna Fáil minister Mary Coughlan, who is now director of the SITT/Locallink transport body in her native Donegal, maligned the circuitous access routes to the northwest and said cars remain a more reliable form of transport to the capital than public transport.