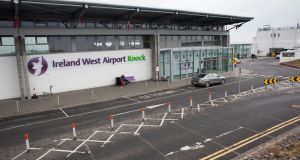 The board of Ireland West Airport Knock has called on the Government to provide financial incentives to maximise the development of adjoining industrial land, which has been designated for fast-track SDZ planning approval.

Some 878 acres of land adjoining the Co Mayo airport have been designated as a strategic development zone, which is defined as an area proposed to contain developments of economic or social importance to the State.

While welcoming this designation, Knock airport’s chairman Joe Kennedy told The Irish Times that this would be of limited value without a package of incentives to develop the site.

The board also called on the government to work on a detailed action plan that “will include the financial incentives package required as well as addressing the existing infrastructure deficits around the airport”.

Knock airport receives a significant amount of funding from the Government for capital investment. Last week the airport was awarded €1.1 million in a safety and security related grant.