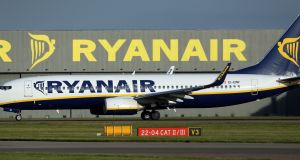 Ryanair is likely to take up an option to buy a further 100 Boeing 737 Max aircraft to add to the 100 that it has already committed to purchasing from the US manufacturer.

Separately the airline also confirmed that it is cashing in on low interest rates by borrowing €750 million through its third-ever bond issue.

Ryanair is due to begin taking delivery of the 197-seat 737 Max craft in 2019. It originally placed a firm order for 100 of the planes and took an option to buy a further 100 if required.

Its chief executive, Michael O’Leary, told reporters in Brussels on Wednesday that the airline had yet to make a formal commitment on the option for the second tranche of 100, but added “we will take them”.

The carrier has until the start of 2018 to decide. If it does, Ryanair will have a fleet of 520 aircraft once the last of the 737 Maxs are delivered in 2024. At that point it will be flying more than 160 million people a year.

The Irish airline has already dubbed the craft a “gamechanger”, as it will cut fuel bills by 20 per cent, while carrying 197 passengers, compared to the current 737’s capacity of 189.

In a separate development, Ryanair raised €750 million on Wednesday from the third bond issue in its history. The debt must be repaid in 2023 and will have an interest rate of 1.125 per cent.

Chief financial officer Neil Sorahan explained that the airline had been looking at funding options and chose bonds, as low interest rates made them the cheapest available.

“We have a large capital expenditure programme ahead of us. At those kind of levels it made sense for us to go to the market,” he said.

Mr Sorahan added that lenders signed up for about €3 billion worth of its bonds after it made the offer on Wednesday, but €750 million was the figure with which it was comfortable.

The carrier hired BNP Paribas, Credit Agricole and Citigroup to sell a benchmark bond that will be due to be repaid on maturity in August 2023. Davy is acting as a comanager on the deal.

Ryanair raised €850 million in 2014 from its debut bond offering, before going on a year later to issue a similar amount of debt.

The new bonds will be rated BBB+ by ratings agencies Standard & Poor’s and Fitch, giving them “investment grade” status and, crucially, qualifying them for the ECB’s €3 billion bond-buying programme, aimed at stoking euro-zone inflation and growth.

Ryanair “has been relatively aggressive recently, buying back €800 million of stock and spending more than €1 billion in capex [capital expenditure], but still only has a small net debt position of €576 million at the end of 2016”, said Joseph McGinley, a credit analyst with Davy in Dublin.

“Investors like Ryanair’s best-in-class cost structure, conservative financial policies and market-leading industry position. Ryanair’s ability to provide consistent free cash flow, even in more turbulent markets, is a key reason why bondholders are happy to support the company at such attractive rates.”