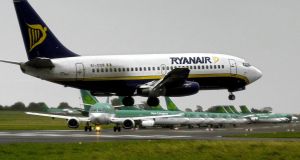 Ryanair is reviewing the two-cabin-bag policy it introduced in the early phases of its “always getting better” customer service makeover. The problem, according to its head of marketing, Kenny Jacobs, is that some passengers are stretching its rules, which basically allow for one standard “wheelie” case and a smaller bag.

As the airline relaxed its strict “rules are rules” approach to cabin bags – and other issues – some passengers have apparently begun turning up at boarding gates with two standard-sized cases, rather that one standard and one smaller bag.

This is causing problems, particularly as many of the flights are almost full, so cabin storage space often cannot accommodate the bags that passengers are bringing on board. The main problem is that it can lead to delays at boarding gates, which in turn leads to increased costs.

Chief executive, Michael O’Leary, referred to the issue at a recent press conference and highlighted it again in yesterday’s third-quarter results statement, where he pointed out that it caused “increasing boarding gate delays”.

Nevertheless, Jacobs says that Ryanair won’t revert to the old way, but will police the rule a bit more and flag this more clearly to passengers. “We need customers to work with us, too many people are trying to bring two bags on board,” he says.

Extra bags are not solely to blame for delays to Ryanair flights. Punctuality dropped slightly in the third quarter, and on average 88 per cent of flights were on time in the nine months ended December 31st, compared with 90 per cent the previous year.

The slip was also down to things such as adverse weather and air-traffic control strikes and staffing problems.