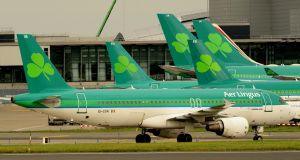 Aer Lingus: Its January growth was the strongest of the four airlines that make up IAG. Photograph: Cyril Byrne

Aer Lingus traffic grew more than 12 per cent in January, according to figures released by its parent, International Airlines Group, on Friday.

Its growth was the strongest of the four airlines that make up the group. Spanish carrier Vueling was next best, at 11.4 per cent, followed by British Airways at 3.7 per cent and Iberia on 2.2 per cent.

The four airlines flew 6.69 million people in January, 5.5 per cent more than the 6.34 million who travelled with the group during January 2016.

During the month, Iberia began selling tickets for its premium economy class, which will be fitted on 37 long-haul craft serving routes from Madrid to the US later this year.

The move is meant to help combat the growth of low-cost carriers on transatlantic routes.