Aviation numbers take off in 2016

Road Warrior: incoming conference business could be worth €330m 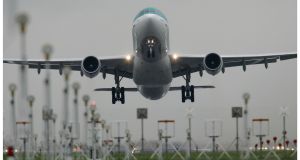 Last year was a strong one for aviation with air travel up by 6 per cent, well ahead of the 10-year average of 5.5 per cent. Capacity rose by 6.2 per cent and pushed up load factors marginally to a full-year average of 80.5 per cent. Demand in December was very strong with an 88 per cent rise in demand outstripping capacity growth of 6.6 per cent.

Fáilte Ireland has identified a potential €330 million spend by the international corporate, incentive and association conference sector. Plans for meetings, conferences and events were discussed in Dublin on Wednesday at the Society for Incentive Travel Executives travel summit. Business tourists spend on average €1,643 on visits to Ireland – more than double the spend by leisure visitors. The tourism agency will be rolling out financial support to the industry during 2017. This will mostly be directed at destination management companies to enable them enhance their offering when bringing incentive programmes to Ireland. The recently established Event Ireland, which focuses on large-scale international sporting and cultural events, had a good 2016. They supported 16 events which generated more than 100,000 bed-nights and €17 million to the economy. Many took place outside Dublin.

1 Farmer seeks to challenge €3.6bn Intel plan in High Court
2 Who are Ireland’s 17 billionaires?
3 Council tells Johnny Ronan firm to keep the noise down at D4 Embassy venue
4 Apple’s cash mountain, how it avoids tax, and the Irish link
5 How to . . . move (almost) everything to your new phone
6 Explorer Petrel gets wider injunction to block sale of shares
7 Intel shares jump 7% on strong earnings and revenue forecasts
8 Cosgrave should give his speech to Web Summit’s partners in Saudi Arabia
9 Steinhoff’s European unit attracting interest for buyout
10 Help, I’ve no PRSI stamps – can I still get a pension?
Real news has value SUBSCRIBE