Airline optimistic in middle of Q4 that, despite faltering profit, prediction will be met 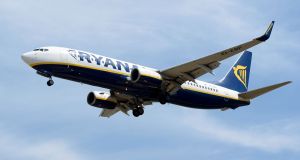 Ryanair is sticking with its prediction that full-year profits will land somewhere between €1.3 billion and €1.35 billion, assuming that a terror attack or other incident does not dissuade people from flying over the next few weeks.

The airline is almost half-way through the last quarter of its 2017 financial year, which ends on March 31st. While profits slipped 8 per cent to €95 million during the three months ended December 31st, the company believes that full-year results will match the guidance it has already given.

In a note published shortly after Ryanair released its third-quarter figures, stockbrokers Goodbody estimated that reaching the mid-point of the predicted range – €1.325 billion – would require profit for the last quarter of €63 million, almost 25 per cent better than its performance during the same period last year.

This is despite Easter falling in April, as opposed to the end of March in 2016. For Ryanair, this means that the extra €20 million or so that its customers spend on air travel over the holiday weekend won’t be included in the final quarter’s revenues, as it was last year.

Achieving this would be a good recovery, the stockbroker says. Goodbody’s own analysis indicates the airline’s profits will fall within the predicted range.

That factors in the company’s prediction that yields – the revenue earned from passengers – will be 15 per cent lower than in 2016 and that fuel will cost 4 per cent less than last year. It expects it will have flown more than 119 million passengers in the current financial year.

The airline focuses on filling its planes and controlling its costs rather than on the price at which it sells seats. The third quarter was no different. It cut overall expenses by 12 per cent.

Allied to that, it flew 28.8 million passengers in those three months, four million more than during the same period in 2015. It sold 95 per cent of its seats, which means its aircraft were fuller than they have ever been at that time of year. The dip in profits stemmed from the fact it sold those seats for a lot less than in the corresponding period in 2015. Its average fare was down 17 per cent at €33.

Another element was sterling’s weakness. The UK is one of Ryanair’s biggest markets and the fall in the British currency accounted for three percentage points of the 8 per cent fall in profits.