US has ‘huge economic interest’ in Norwegian Air deal 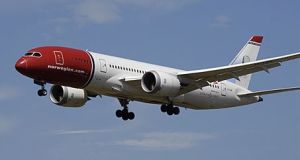 Washington’s department of transportation recently announced it would permit Norwegian to fly to the US, paving the way for it to offer cheap transatlantic flights including long-awaited services from Cork and Shannon. File photograph: Getty Images

The White House has indicated that US president Donald Trump does not intend to revoke the licence issued to Norwegian Air International that will allow it to fly from Cork and Shannon to Boston and New York.

Washington’s department of transportation recently announced it would permit Norwegian to fly to the US, paving the way for it to offer cheap transatlantic flights including long-awaited services from Cork and Shannon.

In December, more than 100 members of Congress wrote to Mr Trump asking him to overturn the permission issued by his predecessor, Barack Obama.

A number of trade unions which originally opposed Norwegian’s application for a foreign carrier’s permit have petitioned the US court of appeals to review the decision, in a bid to have it reversed.

The unions claim Norwegian’s Scandinavian parent is using the Irish company to skirt US and EU labour laws by hiring flight crew on contracts issued by companies in Singapore that offer workers poorer terms and lower protections.

They argue that this breaches the terms of the EU-US air transport treaty, known as Open Skies.

The president is due to meet a number of airline executives at the White House on Thursday.

Mr Trump’s press secretary Sean Spicer said it was his understanding that 50 per cent of the Norwegian crews were going to be US-based and would be flying Boeing planes on the transatlantic routes.

When asked whether Mr Trump would “up-end” the foreign carrier permit issued under the Obama administration, Mr Spicer said the US currently had a “huge economic interest” in that deal.

“There is a huge economic interest that America has in that deal right now. I don’t want to get ahead of the President on that. But just to be clear, I mean, when you’re talking about US jobs, both in terms of the people who are serving those planes and the person who’s building those planes. That’s a very big difference,” he said.