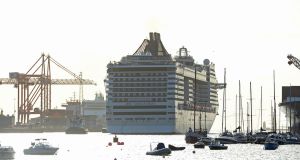 Redeveloping Alexandra Basin in Dublin Port would aid it in bringing more cruise ships to the city, according to a new report.

An Bord Pleanála granted Dublin Port permission to redevelop the basin on the north side of the Liffey to facilitate cruise liners and container ships.

The International Transport Forum said in a report that the project is critical to luring more cruise ships to Dublin and work should “go ahead at full speed”.

The Paris-based organisation’s report, Cruise Shipping and Urban Development: the Case for Dublin, points out that 7 per cent to 8 per cent of the city’s tourists now come on passenger cruisers.

“The value cruise tourism brings could be further increased by developing Dublin into a cruise home port,” it said.