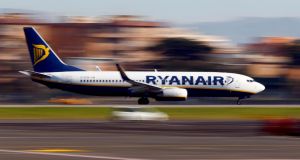 Ryanair will offer customers the ability to connect from one flight to another for the first time, taking another step away from its pure focus on no-frills point-to-point travel.

The move brings Ryanair a step closer to conventional airline operations after decades focused solely on out-competing rival network carriers with bargain basement fares on a point-to-point basis only.

The new policy, to be pioneered at Rome’s Fiumicino airport, is a “big deal” and will be rolled out “pretty quickly” if things go smoothly, marketing chief Kenny Jacobs said in a briefing in London on Thursday.

The initiative, starting later this month, comes as Ryanair prepares to provide feeder traffic for flights operated by carriers including Norwegian Air Shuttle and Aer Lingus, a service that’s set to commence in September.

Like most low-cost carriers, Dublin-based Ryanair has previously eschewed the transfer hub model in order to minimise turnaround times, boost aircraft utilisation and pare costs. People wanting to switch between the company’s own flights or connect with another airline have had to book two tickets via separate booking systems and match up times themselves.

Ryanair could have made the switch sooner, but was “very focused on being the master of point-to-point traffic” and wanted to avoid getting “distracted by too many things,” Mr Jacobs said.

Under the new arrangements bags will be checked through to the final destination, though there must be three hours between flights to allow for delays.

The proposition has become more attractive given the sheer number of flights Ryanair now operates, together with an expansion into primary airports that has attracted more business customers, Mr Jacobs said, adding that Frankfurt has been among current bases pressing it to offer transfers and boost connectivity.

Ryanair’s revamped website is now capable of handling connecting flights. It will also allow customers to book long-haul journeys involving legs with Aer Lingus via Dublin and Norwegian Air through London Gatwick and Irish airports once the feeder partnerships commence.