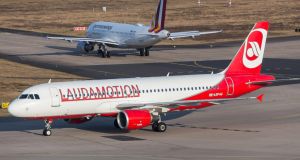 Ryanair’s planned cull of pilots has reached the group’s Austrian subsidiary, with workers there told that the positions of 30 flight-deck crews are at risk.

Laudamotion chief executive Andreas Gruber said in a letter to employees that the jobs will need to go if an agreement on savings and new flight rosters can’t be reached with unions in the next two weeks. A spokesman for the German pilots’ labour group union Vereinigung Cockpit confirmed the letter was sent to the carrier’s staff. Ryanair declined to comment on details.

Europe’s biggest discount airline said this week it would need to cut 900 jobs as it grapples with slumping fares, uncertainty around Brexit and a slowdown in expansion forced by the grounding of Boeing’s 737 Max jetliner. The letter from Mr Gruber seems to offer more scope for negotiation than at Ryanair, which said posts need to go and that the only question is where.

Mr Gruber said he expects a €50 million loss this year – down from a wider loss of €140 million euros in 2018 – as Lauda grapples with the impact of rising fuel costs, low fares and higher pay. He described the figure as unsustainable and said productivity improvements are vital if Lauda is to compete with discount rival Wizz Air and the Austrian Air and Eurowings arms of Deutsche Lufthansa.

“We will be giving our people as much notice as possible of any cuts and we are sorry that we have to take this step, but it is imperative for the future survival of the business,” Mr Gruber wrote in the letter.

The chief executive added that the company’s Vienna operation is “high cost,” putting plans to deploy four extra aircraft there this winter in doubt. Ryanair could alternatively establish its own base there at a lower cost, he warned.

Lauda operates Airbus planes so isn’t affected by the Max grounding that Ryanair chief executive Michael O’Leary said will rob the carrier of many new planes due by next summer. Ryanair kept its full-year earnings outlook this week as a fare war also ate into quarterly profit. – Bloomberg