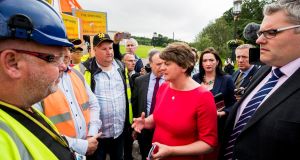 Union leaders fighting to save the stricken Harland and Wolff shipyard failed to meet with Boris Johnson during his first visit to Northern Ireland as British prime minister but are hopeful that he has in his possession a letter outlining why he should renationalise the historic yard.

A delegation of workers from the yard, together with leaders from various unions in the North, staged a protest outside Stormont during Mr Johnson’s meetings with political leaders in Northern Ireland on Wednesday.

Susan Fitzgerald, the regional co-ordinating officer with Unite, had called on the prime minister to “show respect and come out to meet the workforce who have shown such commitment to saving not only their own workplace, but Northern Ireland’s skill base going forward,” but he did not appear.

Instead some of the Harland and Wolff workers were given access to Stormont to deliver the letter to a representative of the Northern Ireland office who pledged to pass it on to one of Mr Johnston’s team.

Harland and Wolff has been thrown a temporary lifeline until next week as plans to place the historic east Belfast shipyard in administration have been delayed until Monday.

Administrators had been expected to take control of Harland and Wolff this week as its owners, Norway’s Dolphin Drilling Holdings Limited, struggle to find a buyer for the shipyard.

Workers at the Titanic’s shipyard have barricaded the entrance to the yard and say they intend to maintain a 24-hours-a-day protest outside its gates to save Harland and Wolff from closure.

Michael Mulholland, an organiser with the GMB union, said workers remained resolute and that there was a “strength of feeling for this famous yard”.

“Harland and Wolff is a huge part of the UK’s shipbuilding heritage – it’s a piece of history and can’t be allowed to go the way of so many other shipyards in recent years,” he said.

“GMB demands Harland and Wolf is renationalised, securing hundreds of jobs and Belfast’s place as a global centre of shipbuilding,” Mr Mulholland said.

But the UK government has not signalled any appetite to step into what it has described as “ultimately a commercial issue”.

A government spokesman said the British government “had every sympathy for Harland and Wolff workers at a time of great personal uncertainty” and offered its “support” but that was the extent of its commitment to the shipyard at this time.

The east Belfast yard, which has been in business for 158 years, was once one of the biggest shipyards in the world.

Although it has just 130 workers on its books today at one stage it employed 35,000 people in Northern Ireland.

The shipyard continues to be a symbolic reminder of Northern Ireland’s once-powerful manufacturing industries and its giant, yellow gantry cranes, known locally as Samson and Goliath, dominate the Belfast skyline.

Despite not securing a direct meeting with the prime minister during his visit to the North both unions and workers say they are determined to continue their fight to save the yard.

The shadow secretary of state for Northern Ireland, Tony Lloyd MP, will be joined by Unite assistant general secretary Steve Turner, Unite regional secretary Jackie Pollock and GMB general secretary Tim Roache on Thursday at another “gate meeting” with workers at the shipyard.