Ryanair job cuts, US rate cuts, and concerns over the public services card 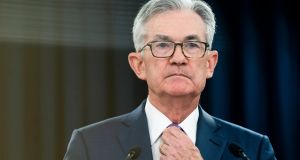 Fears are growing that some of Ryanair’s Irish-based pilots and cabin crew could lose their jobs as the airline prepares to cut up to 900 posts in coming months. Barry O’Halloran has the latest news.

TheUS Federal Reserve cut interest rates on Wednesday for the first time since 2008, but Donald Trump is likely to be disappointed the Fed did not deliver the large rate cut he had demanded.

Shares in Glanbia plunged to their lowest level in almost five years on Wednesday after the nutrition group issued a profit warning after as its main division, which supplies protein products for gym-goers and dieters, saw its earnings slump 30 per cent in the first half.

In Net Results this week, Karlin Lillington considers the ever-growing concerns about the uses of the Public Services Card. “At the moment – and years after the government initially proposed this card – the public still do not know which State agencies will be able to use the card and for what purposes.”

This week’s Inside Business podcast, Cliff Taylor explains how looming international tax changes will be a big setback for Ireland’s relationship with multinationals, while Laura Slattery discusses the other big stories this week, including steep Sterling loses and the continuing controversy surrounding Ireland’s new Central Bank governor Gabriel Makhlouf.

In his column this week, serial entrepreneur and investor Chris Horn runs the rule over the latest proposals from the Government’s tax strategy group relating to funding start-ups and investing in small businesses.

Olive Keogh reports on an innovative agtech start-up that gives farmers an accurate picture of their land, without the usual interference of cloud cover and the like.

Finally, Marie Boran explains why our growing fixation on smartphone-measured sleep data can lead to a worse night’s slumber.

1 Hurrah for the companies giving staff more time off
2 RTÉ to seek 70 voluntary redundancies as ‘large costs’ beckon in 2021
3 ‘We lost money on our planned wedding in Spain. Covid saw to that’
4 How long can Government afford to keep State pension age at 66?
5 Some Irish money market funds came close to danger in March
6 Aryzta to pursue asset sales as takeover talks fail
7 Sustainable investment: How your pension can help tackle climate change
8 Covid-19 will worsen shortage of accountants, says CPA Ireland
9 Policy failed us during the banking crisis and it’s failing us again
10 Ireland pays more than €400m in interest on UK bailout loan
Real news has value SUBSCRIBE