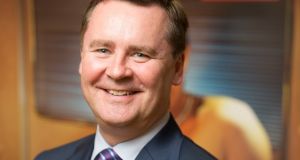 Gulf airline Emirates may consider a third daily service from the Republic to Dubai if Dublin Airport completes its €1.8 billion expansion, the carrier’s country manager, Enda Corneille, said on Tuesday.

Emirates expects to have carried 2.5 million people on the Dublin-Dubai route, which it began in 2012, in December and flies twice a-day.

Commenting on the figures, Mr Corneille said that the “logical next step for us would be to add a third flight, but that would depend on a lot of things”.

He added that if Dublin Airport owner, State company, DAA, were to completed plans to extend piers to add more aircraft stands and boarding gates, this could prompt Emirates to consider launching a third daily service.

Mr Corneille noted that those plans include building a new pier five at terminal two, which would enable Dublin Airport to handle more Boeing 777s, the craft that Emirates uses on its services from the Republic’s capital.

He confirmed that Emirates supported DAA’s plans, which would cost €1.8 billion, to expand the airport’s facilities to allow it handle up to 40 million passengers a-year. “It’s critical that that’s implemented,” Mr Corneille said.

DAA says that proposals from the Commission for Aviation Regulation to cut Dublin Airport’s passenger charges by 22 per cent to €7.50 from next year would cut €1 billion from the State company’s expansion plans.

Mr Corneille would not rule out an Emirates service from Shannon, although he stressed that if this happened, it would very much be in the long term.

He explained that Emirates’ strategy is to enter a market first at a primary airport, but it does expand to secondary destinations if the demand and capacity is there.

Emirates flies 22,000 people a month to Dubai, where most of them connect with services to other destinations.

Mr Corneille said that Johannesburg and Cape Town in South Africa were popular with customers flying from the Republic, as were Kuala Lumpur and Singapore. Emirates flies a “good mix” of business and leisure travellers.

The airline is also growing its cargo business. Between April 2018 and March 2019 it flew 8,000 tonnes of Irish goods, including food, pharmaceuticals and electronics. The most popular end destination for this is Shanghai in China, Mr Corneille said.