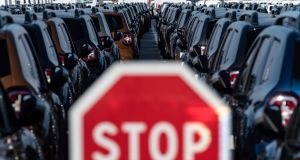 The market for new cars in Ireland is under severe pressure, according to a new report. Photograph: Balint Porneczi/Bloomberg via Getty Images

New car prices could rise by at least €2,500 and as many as 12,000 jobs – or a quarter of those currently employed in the Irish car trade – could be under threat if the Government does not move to alter the motor tax regime to take account of new emissions testing figures.

According to the half-yearly health check of the car sales industry in Ireland, complied by economist Jim Power on behalf of the Society of the Irish Motor Industry, the market for new cars in Ireland is under severe pressure.

That pressure comes from two directions – from domestic taxation and from Brexit. And that’s not even taking the looming threat of a hard, Boris Johnson-led Brexit into account. It is, rather, the continued weakening of sterling against the euro, which is driving unprecedented levels of used car imports here.

Those imports are eating deeply into new car sales. The number of new cars sold is down by 7.4 per cent for the first half of 2019, in spite of some monthly rises in the second quarter.

“Failure to adjust Vehicle Registration Tax (VRT) bands could see the new car market decline to 75,000. That would have a devastating impact on many businesses that barely survived the last recession. It would cost thousands of jobs in towns and cities around the country and would have a very negative impact on the exchequer revenues.

“The motor industry is in a high-risk scenario at the moment and policymakers need to be aware of the risks.”

If sales decline to 105,000 new cars next year, the number of imports will likely equal new sales for the first time. That could also put a serious dent in exchequer returns from the motor trade. According to Mr Power’s report, for every 10,000 new cars sold, the Revenue Commissioners receives €101 million in VRT and VAT. For every 10,000 cars imported, though, that number dwindles to €35 million.

Failure to adjust the vehicle taxation system in light of the implementation of the new Worldwide Harmonised Light Vehicle Test Procedure (WLTP) economy and emissions test could have disastrous consequences, the industry fears. Simi projects that a no-change tax system would see new car sales decline to 75,000 cars next year. Other industry leaders have predicted a figure as low as 65,000 or even 55,000 – a level not seen since the deepest depths of the 2009 recession.

While there have been proposals put forward in recent weeks to change the tax system, and even to potentially limiting the number of imports, Mr Power warns that proposals are a long way from concrete action.

“If the Government does not adjust VRT bands in Budget 2020 to take account of the WLTP changes, the average price of a new car could rise by at least €2,500,” he said. “While the recently published Inter-Departmental Tax Strategy Group paper on motor vehicle taxes makes a number of suggestions about taxation, this does not mean that these suggestions will eventually become part of Budget 2020.

“The price increase for the more popular mid-range model could rise by significantly more. In the current environment, such price increases would have a devastating impact on new car sales.”